We got a fun surprise in the mail yesterday.  Miss Cora's pretty little face is now gracing Woodbine House's Third Edition of  Early Communication Skills for Children with Down Syndrome. 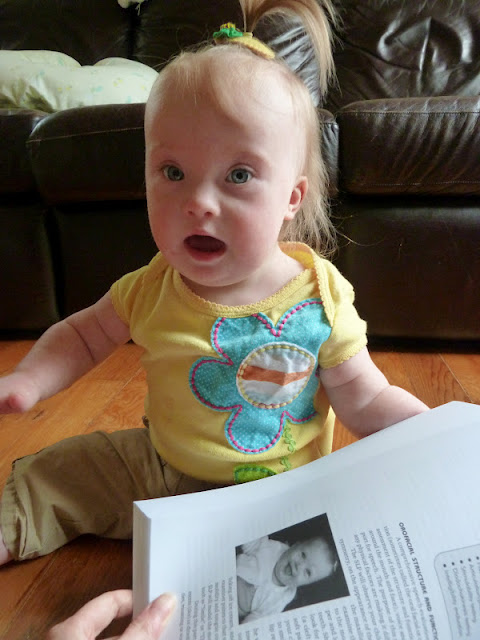 Pretty fun!  We have the earlier version on my side table and several of the other Woodbine House books on Ds in our bookshelf, as well. Doing a quick scan through last night, I caught glimpses of some of Cora's online pals: Lily, Ellie, Vada, Ollie, and Joey.  How exciting, that Cora gets to be one of the beautiful faces in this book!

The rain is still doing its best to keep us inside, although I finally have enough energy after this epic sickness to do exciting things like empty the dishwasher, clean the bathroom and do grocery shopping.  But I am hoping that summer will join us soon.  We have some fun things planned, starting later this week and continuing on through the rest of the summer.  So be sure to gear up for a season of Cora-filled fun!

A Diversion for the Couch Potatoes

We've been mired in the crud over here.  It feels never-ending.  Luckily, so far Cora is the least affected.  I am just starting to get my voice back and am hoping for relief from this cough. At least my abs are getting a good workout.  Nick finally succumbed last night, which is rare for him.

Cora and I have morphed into two couch potatoes over the past few days, effectively rotting our brains with Signing Time (She loves her new Potty Time video!), Sesame Street and a couple others I won't readily admit to.

I've been neglecting the house, the laundry and the blog.

But I figured the least I could do is post a couple pics of my cutie on her brand new tricycle, which we scored at 7:00am at a yard sale on the way home from her sleep study, just before this crud took us full force.

She hasn't had a chance to get back on it, but we're keeping our fingers crossed for soon.  We are ready for summer to begin and can't wait to experience it from locations outside of this little old couch. 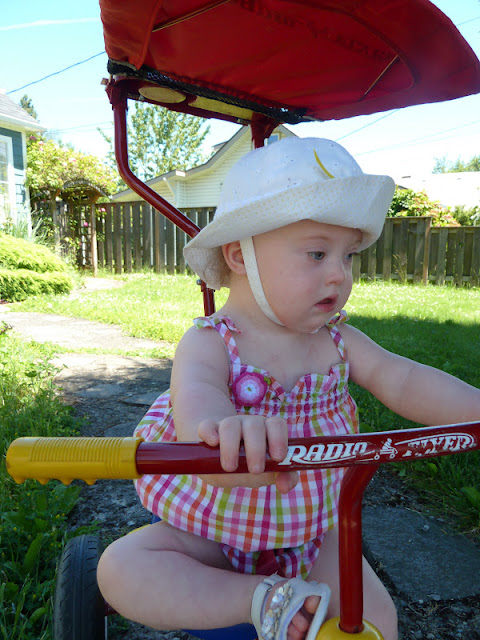 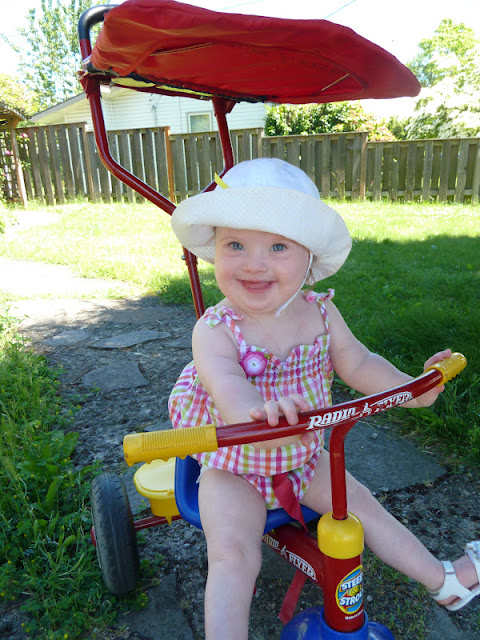 Today my Mama can't talk, so I told her I would help out.  You know, since I am a big 17 month-old girl now.  She is sick and has lost her voice.  That means she can't really talk, but she can whisper a little.

Since she can't talk I thought I'd tell you what I've been doing.

I'm sick too, Daddy says, but not the same as Mama.  I have a "head cold".  It makes it hard to breathe, especially at night.  So I cried a lot at night and Daddy tried to make me feel better since Mama wasn't sleeping with us.  I don't like it when Mama isn't there.   But I am going to help, even if I don't feel very good.

Today is Father's Day, but we are staying home to rest.  Sad for my Daddy, I think, that we can't go do something fun.

This weekend has been weird.  I didn't like parts of it.  First I went to see the eye doctor, who put stuff in my eyes.  But it was OK, I guess, and Mama was happy since I don't need glasses.

Then, when it was bedtime we went to a hospital for a "sleep study."  First a lady put things all over me, which was OK.


But then she wrapped my head in white stuff, which I didn't like.


Then Daddy left and we went to bed.  But it was hard to sleep and I cried and was sad.  I woke up a lot and wanted to snuggle, but then when morning came we got to go home.  (On the way home I got a fun new toy, but I'll tell you about that another day.)

Daddy took all the pictures of me with his phone.  Mama says they're blurry, but I'll show you anyway.  This is me with all the sticky stuff in my hair.  I was happy to be back home. 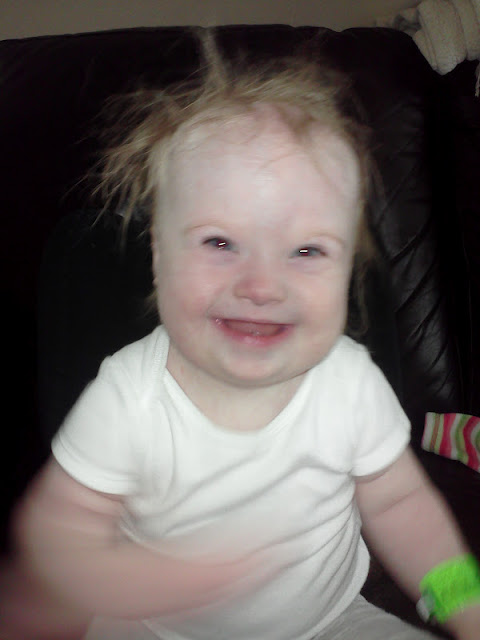 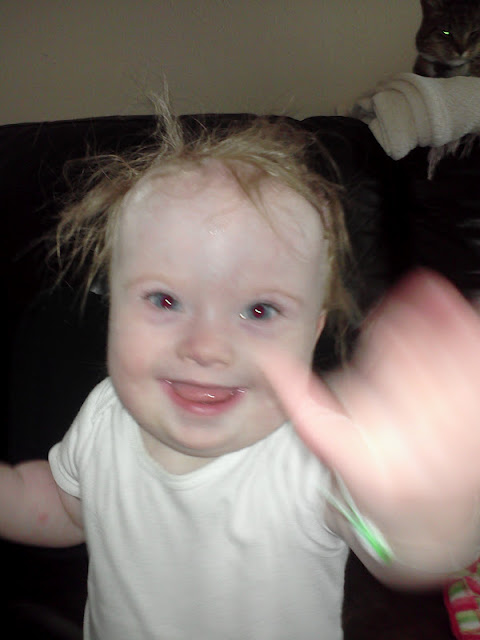 Here's a funny picture of me with Daddy. 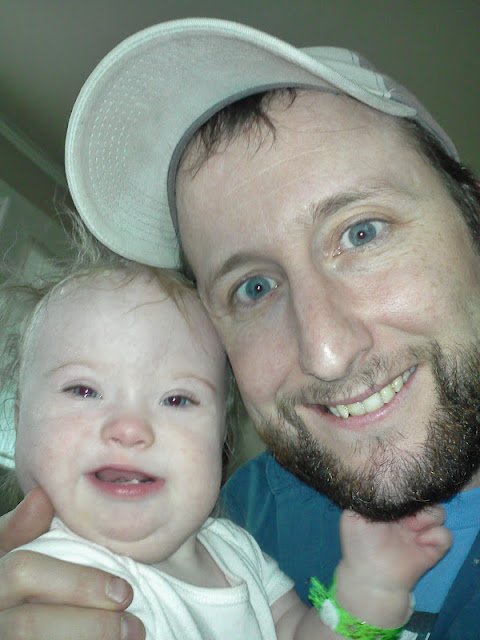 I'll try and keep you posted.  I hope me and Mama feel better soon.

Happy Father's Day to everybody, but especially to my Daddy and to my Grampie Phil and Grandpa Mike!
Posted by Leah at 8:11 AM 7 comments:

Daddy was in charge of napping duty this afternoon.  Quick emergency bath time, followed by being put to bed without brushing her hair resulted in this lovely "do."

Looks like Cora is channeling her inner Cyndi Lauper. 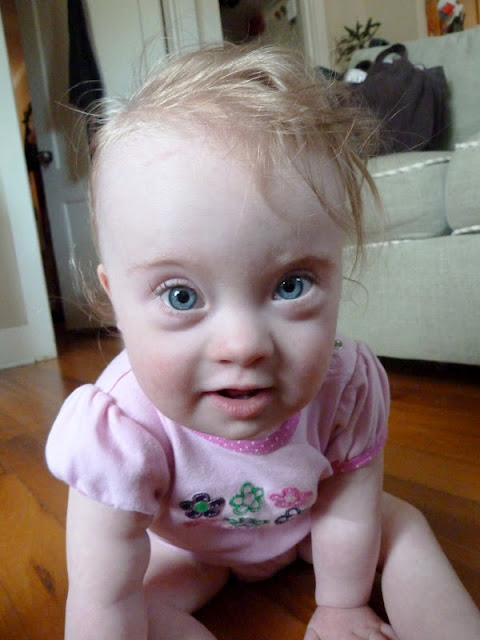 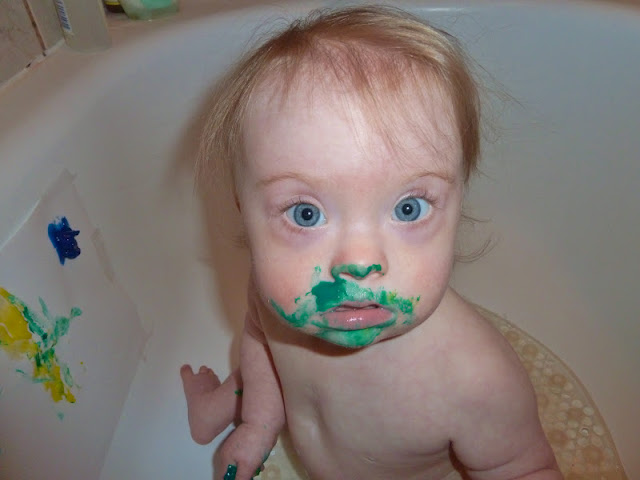 Need a rainy day activity?  Something to entertain your toddler that doesn't take a lot of work to set up or clean up?

Especially not when the whole family is stuck at home with the sore throat and sniffles that seem to be going around.

I think the whole thing entertained Cora for less than 5 minutes.

This time I thought I was being smart by setting it up in the bathtub.  But even so, I was exhausted after clean-up.  Maybe Cora's just not quite old enough to find finger-painting truly entertaining yet.

But she did seem to enjoy painting her body and attempting to finger-paint her tongue a few times. Follow the whole thing by a bath and she's a happy girl. 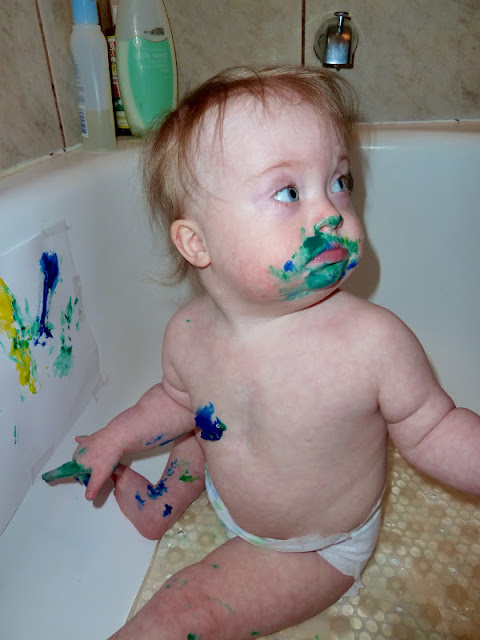 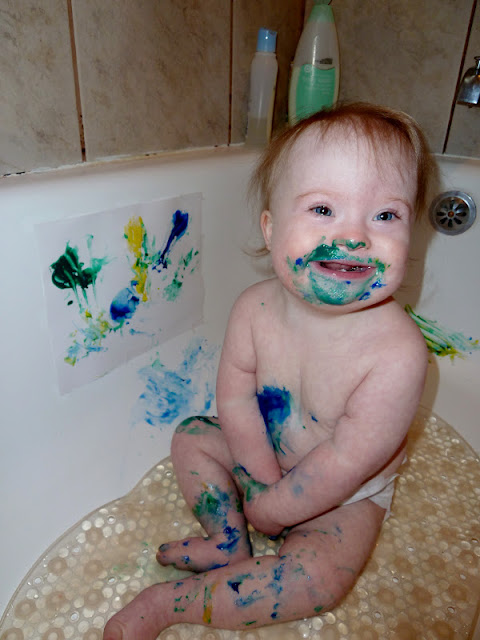 Looks like we'll be watching some Signing Time to get through the rest of the day.  Hope your day is  a bit more action-packed than ours!
Posted by Leah at 4:09 PM 6 comments:

Under My Skin- Blog Hopping!

There are so many things people say that are irritating.  I don't really love it when people say "Down's baby", "Down's kid", or "a Downs".  Luckily, I haven't heard a lot of the other pejorative terms, at least in reference to Cora.  I'm not quite sure how I will respond when I do.  One of the things that bugs me the most are the generalizations I often hear medical professionals make, as though Cora has every single potential medical characteristic that can be present with Down syndrome.  Or when a legitimate and treatable concern is written off as just part of having Down syndrome.

But these days the comment that gets me thinking and reacting the most is something else.  Usually it's a comment made by an acquaintance, someone I'm on friendly terms with.  It's usually said by someone who already appreciates Cora to some extent and that fact alone keeps me from being truly offended.  Months ago I had to consciously learn to interpret intent, when comment after comment was getting under my skin.  I had to teach myself to be patient with people who are learning, especially when that person loves Cora.  Because God knows I have had to learn too.

The thing that really has been getting to me though is the "I really admire you" kind of comments.

Recently, while chatting with an acquaintance I hadn't seen in almost a decade, she asked me if we knew that Cora had Down syndrome before she was born.  I told her that no, we didn't know.  She then went on to say, "Wow, I really admire you."  In hindsight, I realize I stopped listening at that point.  I began asking myself what that really means.  Did she mean to say that she admires me because I didn't abandon my daughter?  Because that's what I heard.  And it felt ridiculous to me.  Beyond ridiculous.

Amazingly, it's not always ridiculous, though.  A friend of mine has told me that when her daughter with Ds was born in the hospital, she noticed a newborn in a room down the hall that never had family around.  Before leaving to go home, they learned that the baby had been born with Down syndrome and had been left at the hospital by its parents.  Shock and disbelief, right?  In Eastern Europe today, orphanages are filled with children with Ds, as parents routinely give up their children with Ds.  It wasn't long ago that in the U.S. many parents sent their children to institutions at birth, advised by medical professionals that it was best for them and for their children.  Those parents were told to tell family and friends that their child had died.

And as we all know, the termination rates for babies diagnosed in the womb is searingly, frighteningly, painfully high.  So maybe the fact that I am raising my daughter does seem admirable to some.  It just doesn't seem so to me.

The truth is that if you asked me before Cora was born whether I would consciously choose to have a child with Ds I probably would have said no.  Most of the parents I know with children with Ds would probably say the same.  For most of us, learning our children's diagnoses was painful and scary.  But wonderfully, most of us have been up to the challenge and our lives are better as a result.  All of the parents I know are making decisions for their children, raising their children in the best way they know how, determined to provide the best possible opportunities.  I am just one of those parents, trying to do the best I can for my child, loving her fiercely.

Perhaps I need to start asking more questions when I get this kind of comment so I'm not left to interpret their inference, rife with hidden judgments about the value of my child.  Perhaps those people aren't really saying that they admire me for raising a child they would not want to raise.  Maybe they are saying that they admire the choices I am making as I raise her, or they admire the way I write about our life with her.  Perhaps they admire my point of view. And if they really do think that Cora's value is somehow less and that I am special because I am making something good out of a bad experience, maybe that's just another opportunity to educate and show them that it is her that makes me special.

The truth is that I am the lucky one.  I have the privilege and the honor to spend my days with a child that is so full of life and light and love that sometimes all I can do is be awed.  I get to be the one to soak up these moments and bask in her love.  Oh those moments.... when she rests her little head on me for a sweet hug, or dips her face down to me, presenting herself for kisses.  Heck, if I weren't me, I'd certainly be jealous of me. 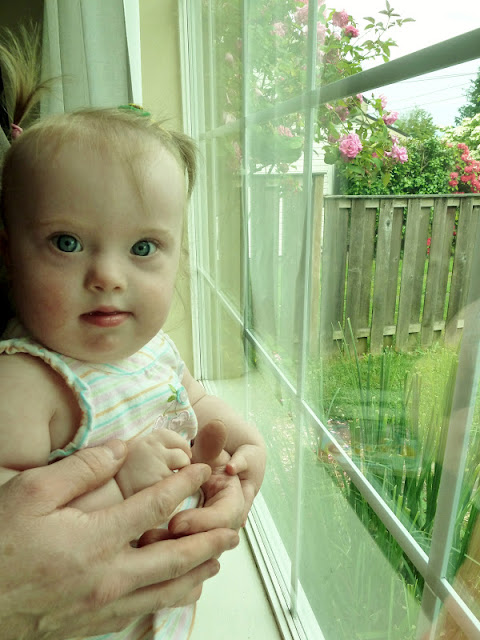 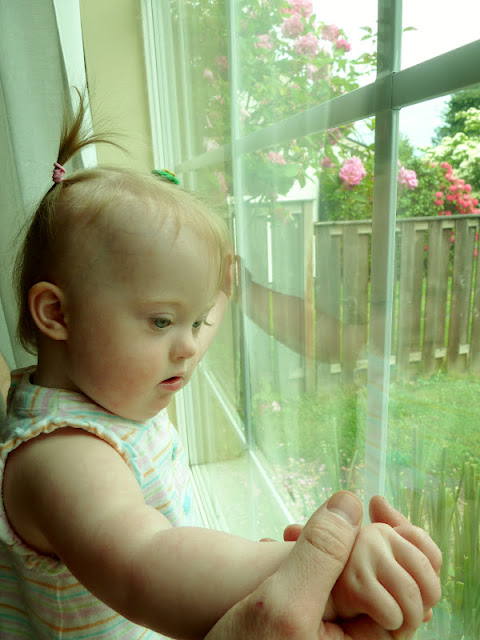