It's hard to believe that Christmas has come and gone, again.

It was our third wonderful Christmas with this girl. 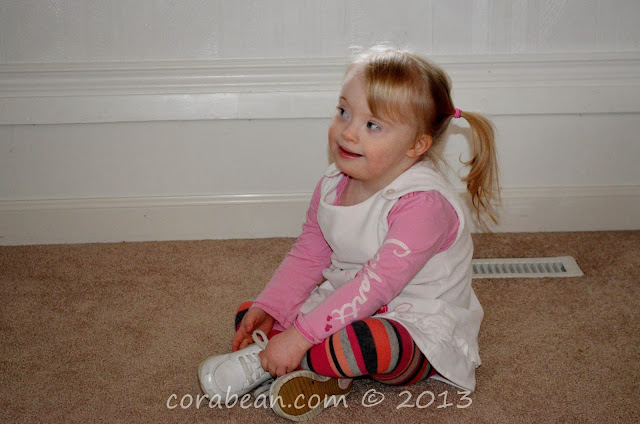 We spent most of the week with my family in their new little house, after they downsized this summer.  It was a fun, chaotic, crazy mess of people and food, and cousins in close quarters.

I keep thinking that "next year Cora will understand Christmas and she'll be excited."  But it hasn't happened yet so far.  Although she did enjoy signing "Santa," "magic," and "Merry Christmas!"

And she definitely got into gifts, once again.  We kept her gifts pretty modest this year, as we have in the past, knowing that she will be spoiled by other family members, and that we don't want to overwhelm her and ourselves with a ton more stuff.  But the gifts that she did get were special, indeed.

One of the best is her new big girl doll, Lulu, given to her on Christmas Eve.  Grammie hand-made a doll with all up-cycled materials for each of her grandchildren this year, complete with small wardrobes, and spent probably at least a hundred hours between the two.

Kai was a little faster at opening his big boy doll, Twig. 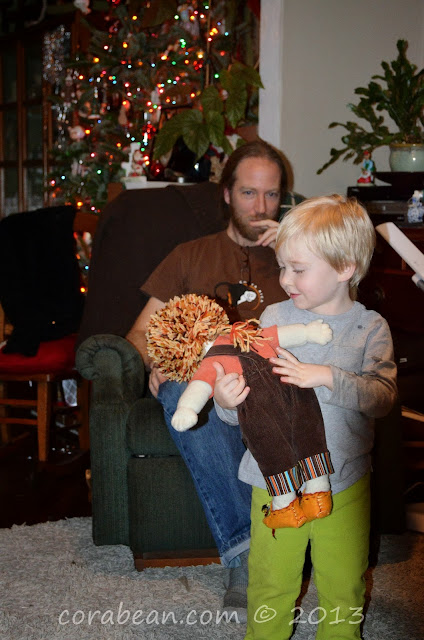 But Cora took her time until her Lulu came into view.  The first thing she did when she saw her new dolly was to give her a big fat kiss and a hug.  I think it melted her Grammie's heart. 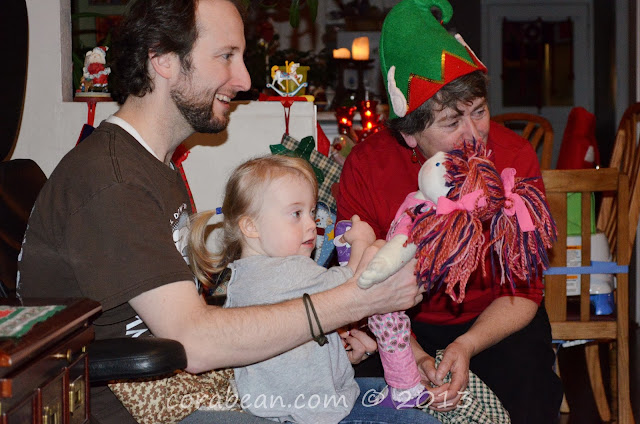 What a happy girl! (Especially after stripping Lulu of all her clothes... one of her current favorite activities.) 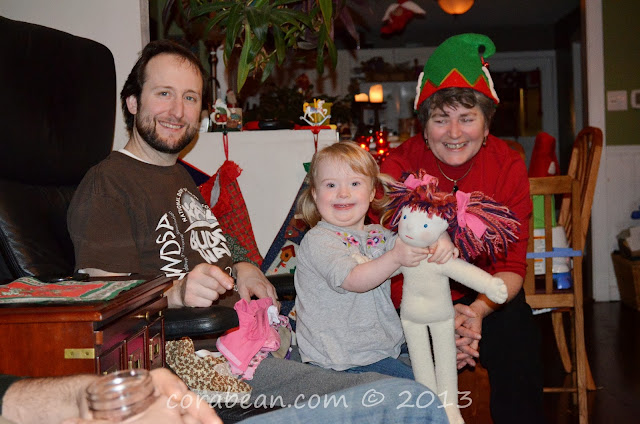 And baby cousin Carys got her own first baby, Clementine. 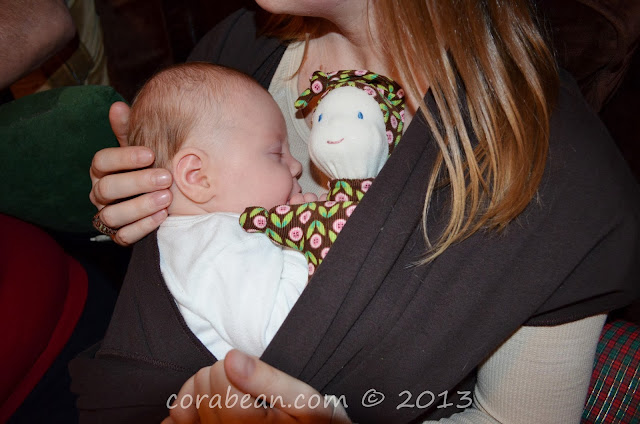 Cora enjoyed the rest of the morning, unwrapping and playing, watching her cousin get excited, and getting snuggles from some of her favorite family members. 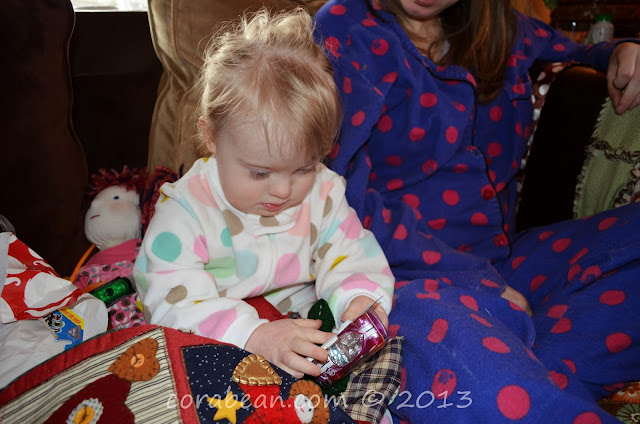 Seeing cousin Kai open his "Very Merry Christmas Corderoy"doll and a small matching doll for his new friend Twig was one of the most fun moments of the morning. 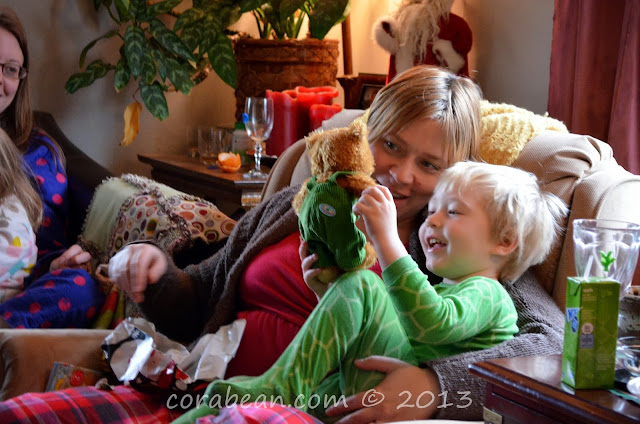 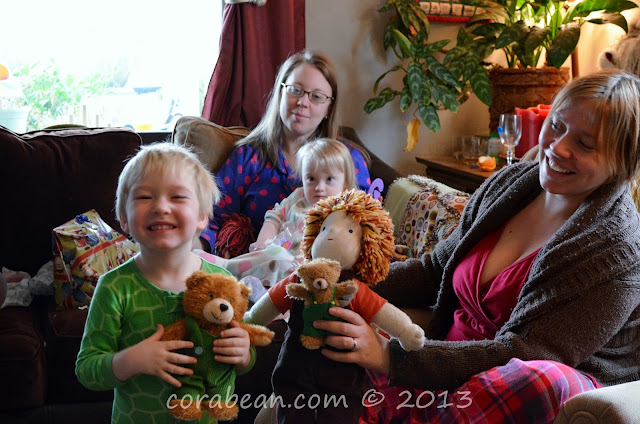 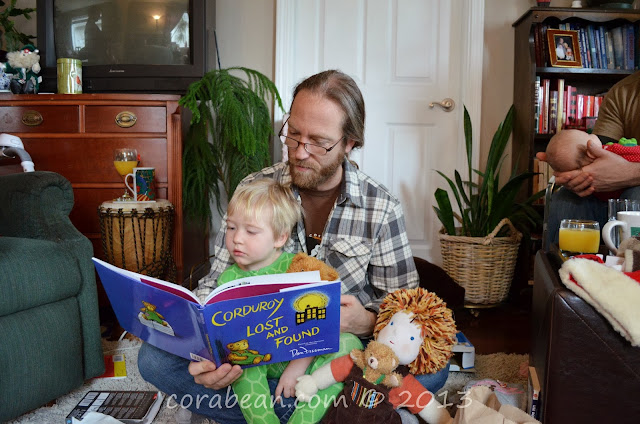 And the rest of us spent an awful lot of time doing this... 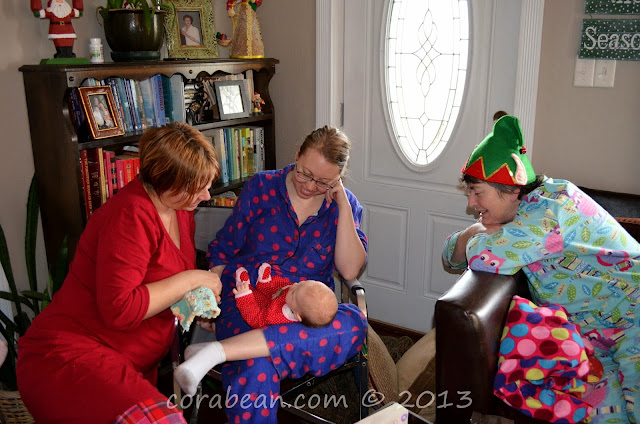 Crowding around my sister Mira's two-month old daughter Carys, who is just as captivating and lovely as you can imagine a baby to be. 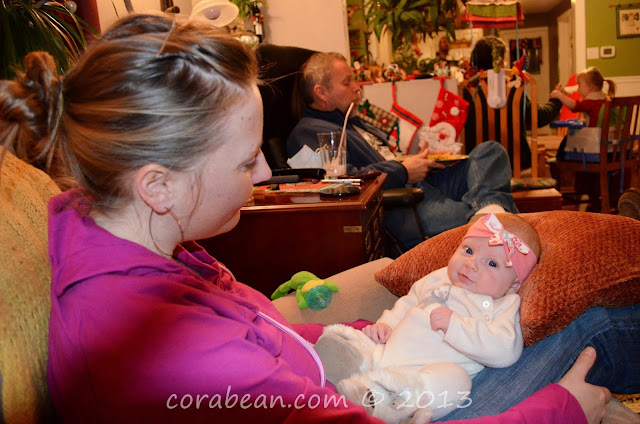 The cousins were pretty interested in her too.  Cora kissed her, touched her, smelled her and said "stinky," and patted her little bottom, announcing, "booty."  I'd say so far it's her most successful baby interaction, and it made us all very happy to see.

Kai loves Carys too, and asked his mom if he could take her home. But every once in a while, in a very almost-three-year-old boy fashion, he tested the limits.  Like when he wanted to see if Carys wanted to wrestle with a big stuffed lizard.  Luckily Carys is a tough girlie. 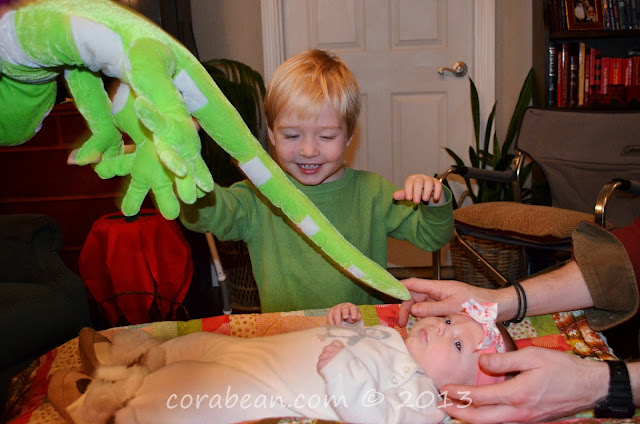 Overall it was lovely and over way too fast.

And although we spent from Thanksgiving to Christmas trying to keep Cora from getting sick, including postponing family visits and making anyone with a tickle wear a mask in our house, we were foiled again!  Some of my family members had been sick, so we tried to keep away until it seemed the contagion had died down, but on the last day of the trip my dad came down with cold symptoms and Cora quickly followed suit.

She seems to be doing OK, although she's started coughing a bit.  And boy, do I hate hearing a cough from her.  It's one thing when you can count on a cold to be a cold, but my girlie has had way more bouts of pneumonia than I am comfortable with already, and she is pretty susceptible.  So we're keeping our fingers crossed that her lungs stay clear, and that we can soon be thankful that she only got a small cold.  Of course, Nick and I seem to be falling sick too, so we are capping off our happy holidays with time at home, resting under lockdown.

It feels way too familiar after such a long spring of illness.