On Her Own Two Feet 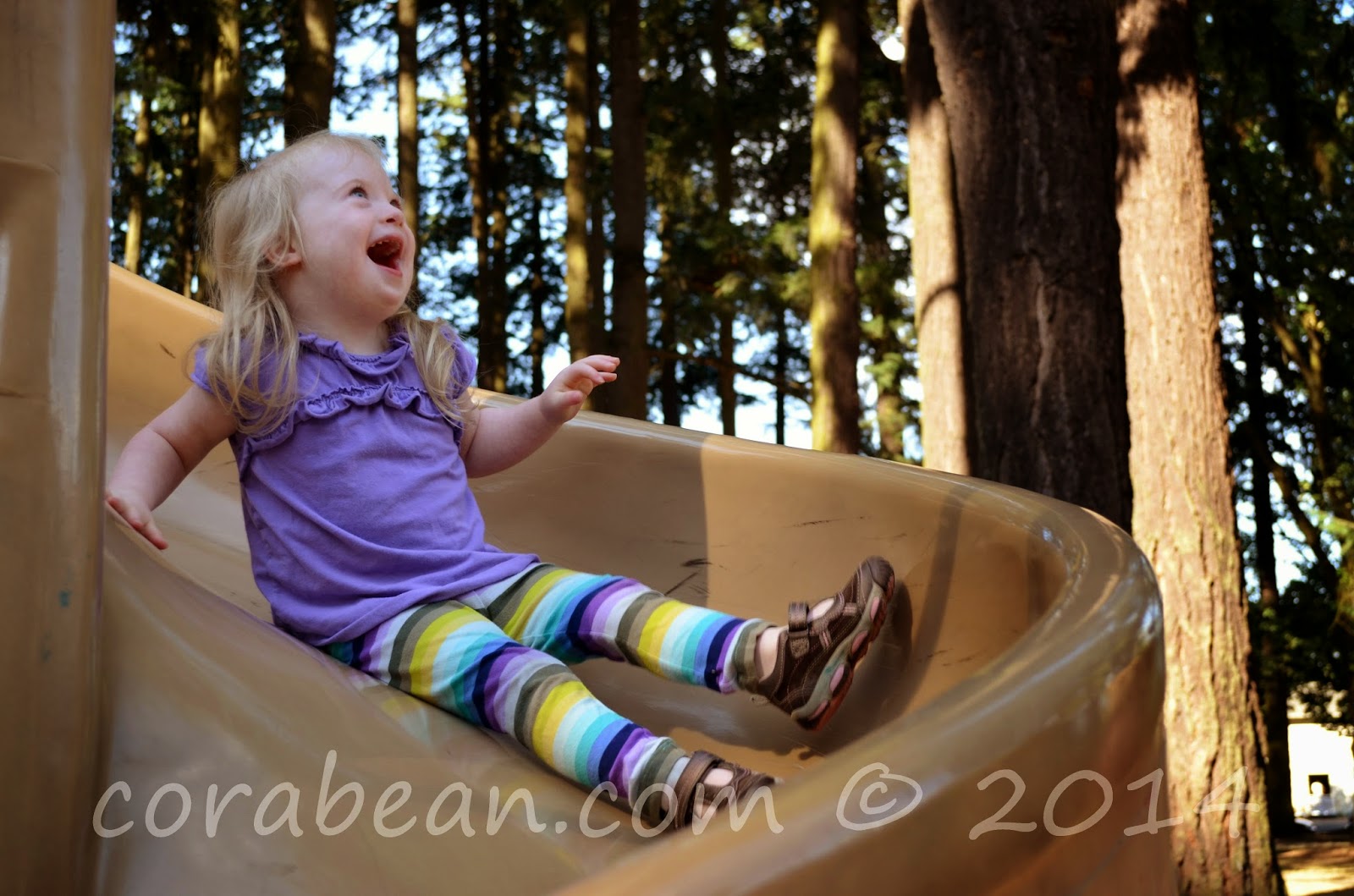 This little girl has been learning how to get by on her own two feet so much this summer.

It's quite amazing, really.  To think that she's only been a full-time independent walker since last November, seeing her racing around, climbing with confidence and exploring the world with her body is so impressive.

It's also been a little bit terrifying for me, and a pretty big lesson in learning to let go just a bit and to trust.

During the last four months of my pregnancy we didn't do a whole lot.  Right when park-going season started, I began to have serious difficulty being on my feet.  So our daily 10-minute walks to the park turned into occasional drives to the park, where I'd hobble around after her.  For a long time they stopped altogether unless Nick could take her.

What should have been the time for her to really start getting steady on those feet and on uneven surfaces became way more time in the house, and endless viewings of Frozen.  And there was lots of Mommy guilt about it.

When I was able to accompany Nick and Cora to the park at the end of the pregnancy and when Ruby was just born, I'd watch from the sidelines, having episodes of major anxiety and hiding my eyes as I saw that Cora no longer climbed up the stairs on the play structure on hands and knees, but walked up holding onto the railing.  Nick no longer followed her up to spot her, but stood down below the openings just in case.  I watched her hang onto the bars and swing her body over the tops of the slides, bear crawl up huge slides, and climb up structures with some pretty adept new skills. 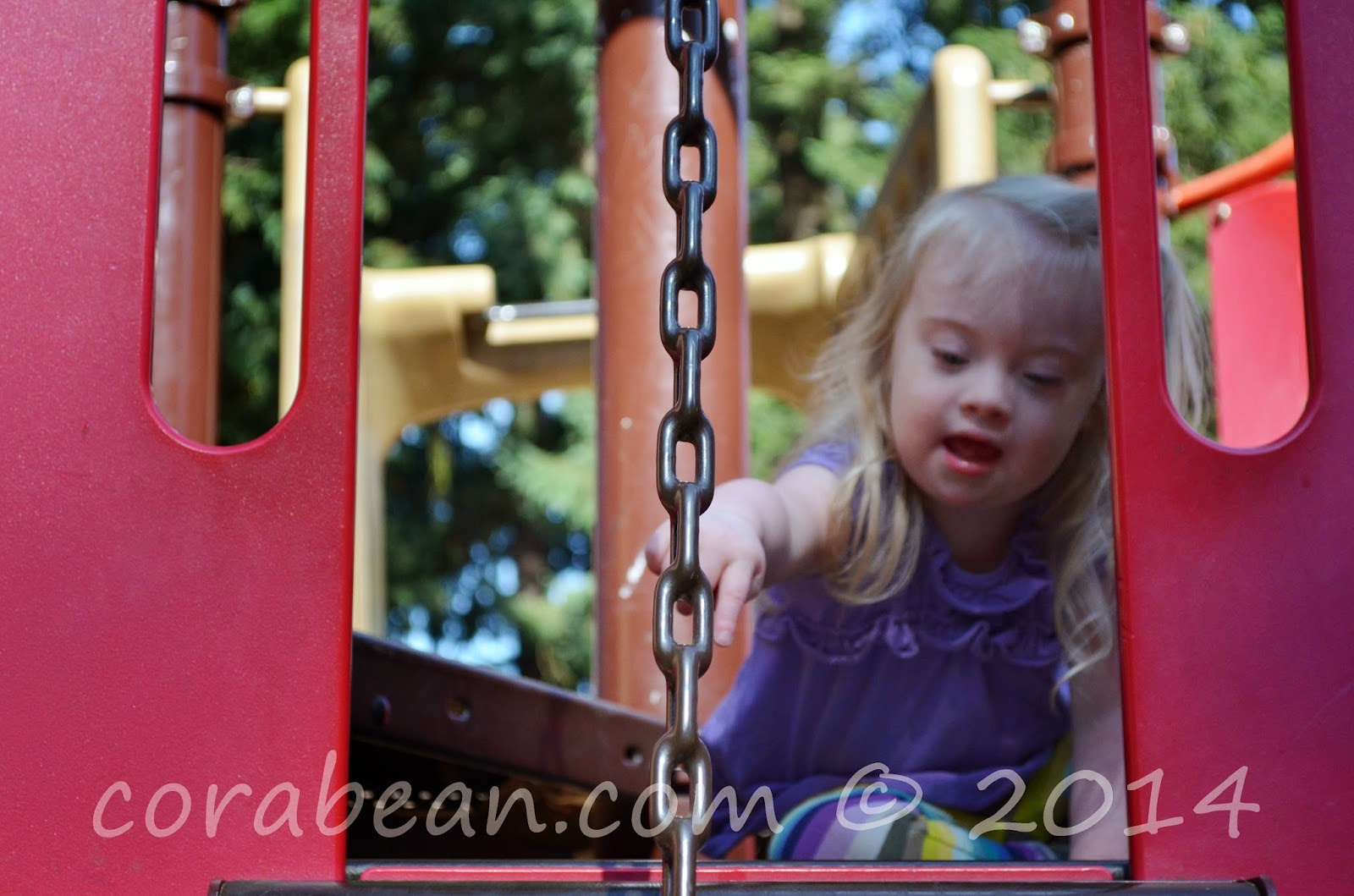 Knowing that she's still a bit unsteady sometimes, and that when she gets nervous around other kids she will slowly step back or to the side terrified me, as I envisioned her plummeting down the 40 foot drops by accident.  (OK, I know... it was probably only 6 feet at the most.) 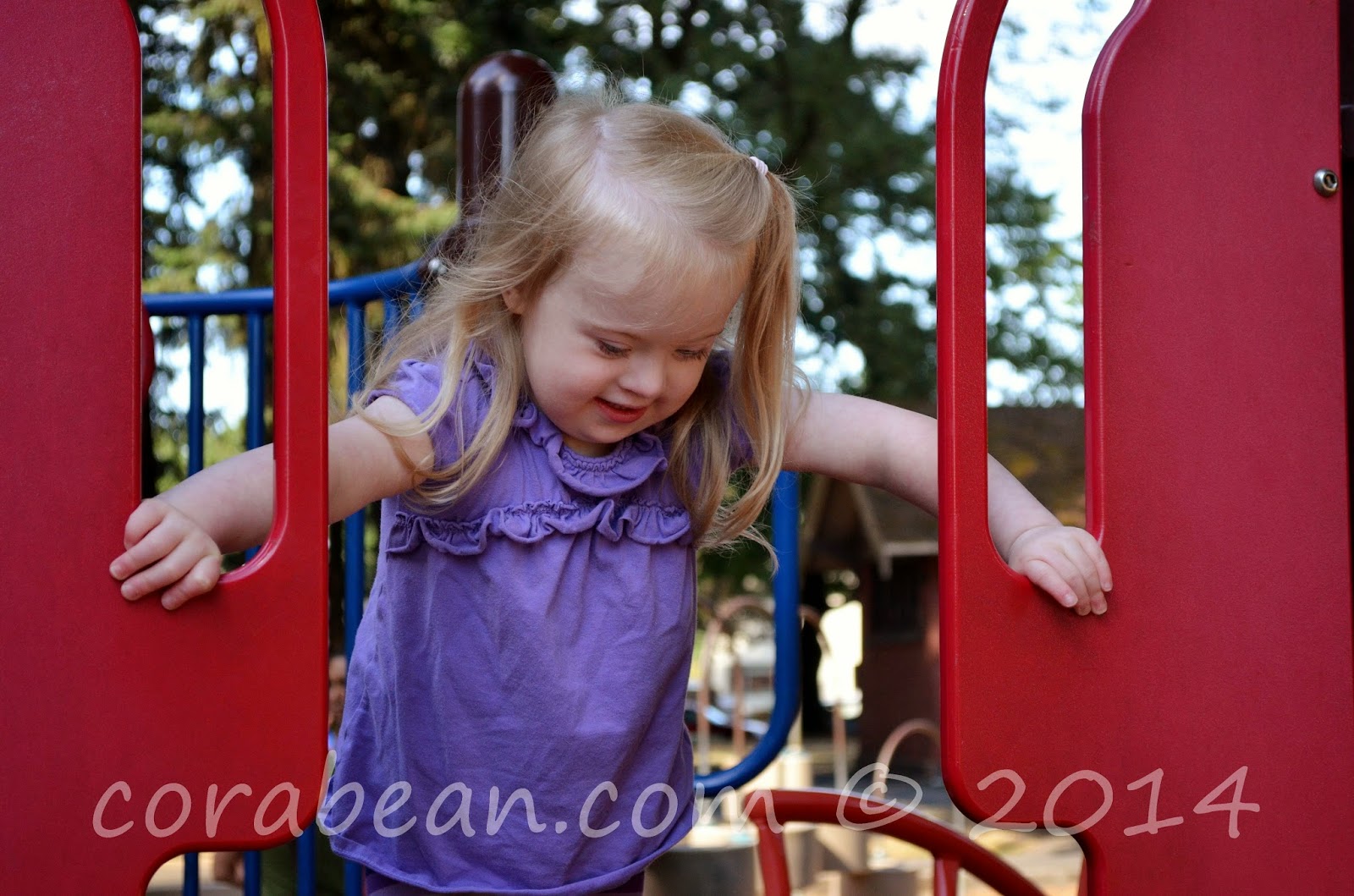 I swore I'd never be able to handle taking both girls to the park alone; that my blood pressure just couldn't take it.

But over the past three weeks I've finally been brave enough.  And I must admit it, I'm pretty darn proud of this girl.

Proud of her spirit, of her joy, of her willingness to throw herself into new things, even if right now her new experiences are limited to the playground. 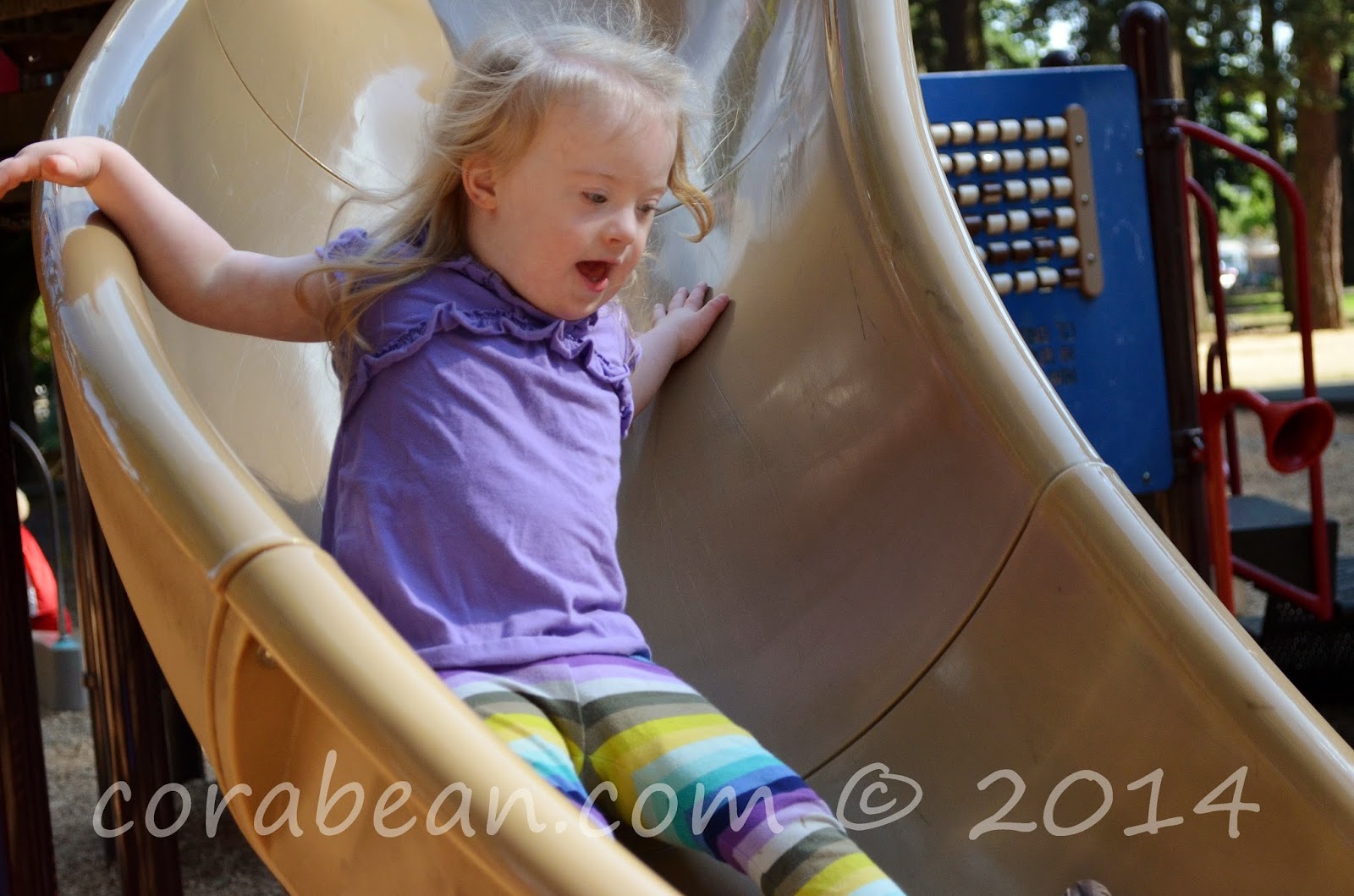 Very soon she'll be throwing herself into something entirely new.  Preschool.  Just the thought makes me start to shake a little.  She'll be starting at a cooperative preschool two mornings a week in September.  I'm pretty sure she will be the only kid with a disability.  I have a list of my worries (including safety on the playground and in the classroom, especially with her tendency to run).  But I think the strongest current of worry I have is how she'll fit in.  Will the other kids relate to her?  Will she make friends?  As a coop preschool, the parents are teachers in the classroom a couple times a month.  Will the other parents warm up to her, or will they feel that she's a burden?  Will I feel like the outsider as a "special needs mom"?  Does the fact that I am even having these thoughts mean that I am already setting us apart?

I really don't know how any of it will work out.  But I am hopeful.  I am excited for Cora and for these new opportunities.  I am excited to be finally starting her real organized educational experience, and for her to be included in a typical classroom, as a part of a community.

I am looking forward to seeing her plant her brave little feet on new ground and take off running.  I only hope I can keep up. 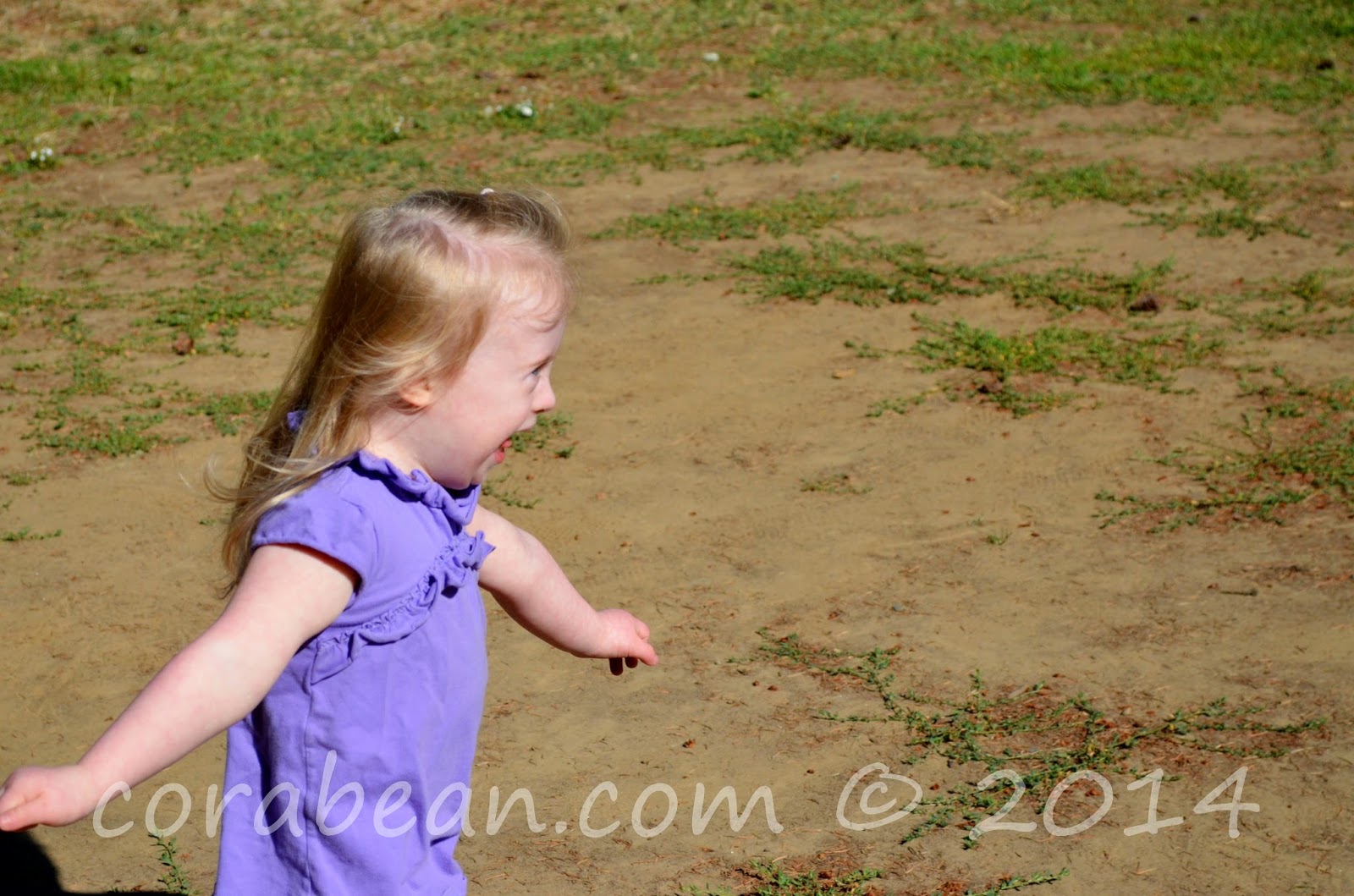 Email ThisBlogThis!Share to TwitterShare to FacebookShare to Pinterest
Labels: Development, Thoughts from Mum