I have an almost one-year old.  It's just shocking, really.  And she is getting bigger.  After almost 2 months of staying at the same weight, she's been starting to look a little doughy of late.  The cheeks are bigger, the chin hangs down, and her little Michelin man arms are getting rounder.  And the scale this morning said....  16 lb 10 oz!

I spent a few minutes browsing online yesterday, which I seldom do anymore, since I am obsessed with blogs and trying to get work done.  But instead I read a an article that says that working moms are happier and healthier than SAHMs.  For some reason that just seems a little bit hard to believe.  It talks about how isolated and depressing being a SAHM is.  And it got me wondering whether this is really true for the majority of people, let alone for me.

I do agree that being a SAHM is a lot of work.  And hard work, despite the fact that it's not physically grueling or remarkably intellectually exhausting.  We don't get weekends and evenings off, of course, and since Miss Cora wakes up often and for prolonged periods throughout the night, I do too.  I get a little antsy for big people conversation here and there, and get tired of finding different ways to run through my list of Cora's therapies and developmental games.  But am I more depressed?

At my beautiful friend's Christmas party the other day, she remarked that I seem in a better mood and happier in general since Cora has arrived.  She's also said that Nick and I seem happier as a couple, too.   And that put a big smile on my face.  Even with the very little sleep and the extra stress that having a child "with special needs" is supposed to put on my life, one of the people who knows me best thinks I am happier.  And that makes me happy.

When I look at it, I am happier, though tired and often stressed.  Even though I fantasize about going to a movie sometimes, or getting to read in the middle of the day and ignoring the house and home for a while, I really am thrilled being Cora's stay at home mama.  To get to spend my days with the most amazing little person in the world really is the best job I can think of. 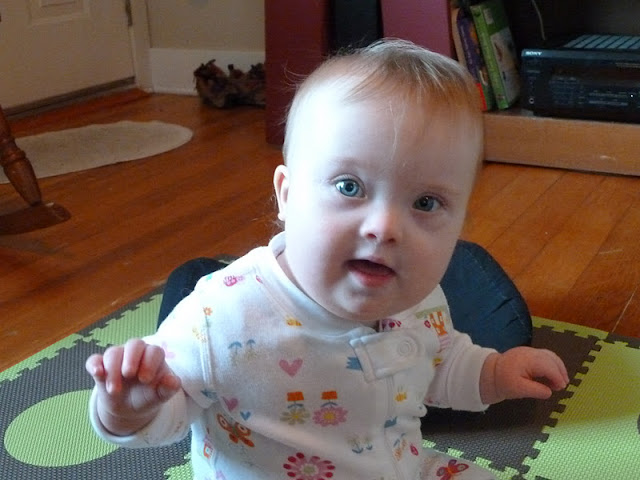 I leave you with an image from yesterday's fun activity.  Well, fun for me at least.  Cora tolerated it fairly well.  I think it may be a little premature to be experimenting with pigtails.  Granted, her hair is growing, but there's still not a heck of a lot to work with.

Email ThisBlogThis!Share to TwitterShare to FacebookShare to Pinterest
Labels: Thoughts from Mum