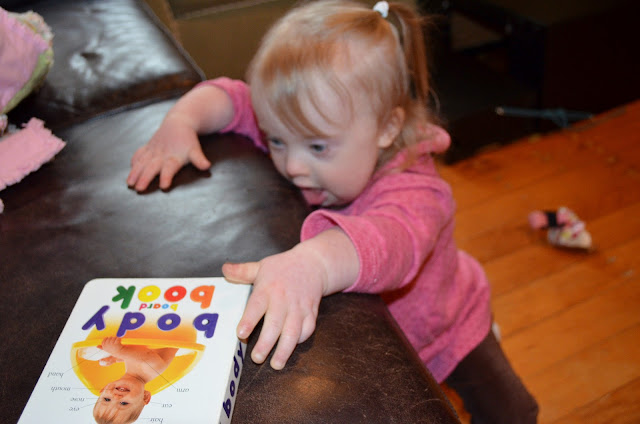 I hear a lot from parents of kids with Down syndrome, telling the world how very hard their child works to reach milestones and accomplish things that come easily to the typical population.  How their child works tirelessly, pressing forward, eager to achieve, never giving up.

And then I wonder:  why doesn't my child seem to have this pressing drive that so many other parents see?

In my reading on raising a child with Ds, I read that often children with Ds will find shortcuts and take "the easy way".  This isn't just due to laziness.  It's often because low muscle tone and hyper-mobile joints with loose connective tissue make it difficult to use muscles easily.  Muscles with low tone are not always ready to do work like typical muscles are, so extra signals need to be sent to make any movements.

So a movement that comes easily to a typical child may be very difficult for a child like Cora.  Case in point:  getting onto her hands and knees to crawl, bearing weight by standing, climbing up stairs, moving to a seated position.  A child with low tone actually needs to be stronger to do the same movements someone else will do, because greater strength is needed to stabilize loose joints and more work is required for even simple movements.

Reading more about low tone this weekend clarified to me why Cora does many of the things in the way that she does.  It helped me understand a little better what low tone means to her and why it is so hard for her to do certain things.

And it makes sense that if someone, even you or I, could adapt our movements to make certain things easier, we certainly would, wouldn't we?

Well so does Cora.  And that's why she butt-scoots instead of crawls, and is just now learning to do things that very young babies often master well over a year before she was even willing to try.  The fact that she hasn't had much practice doing these things makes it that much harder for her to do them.  Her muscles haven't figured it out.  Her muscles haven't strengthened in the ways needed for her to do these movements.

But the difficulty alone doesn't exactly explain her lack of motivation.  I see pictures and stories of children Cora's age with Ds who are walking, taking steps and moving all over the place, low-tone and all.  Their parents constantly applaud their fierce determination.

Cora just isn't doing that.  This is largely because it's just not her priority and it's not in her personality.  Children are often said to be either "motor driven" or "observers."  It is clear that Cora is an observer.  That she would rather read, and sing, play and communicate than try to walk or crawl.

And, like her mother, she seems to not want to do things when they are too difficult.  I admit it.  When things don't come easily to me I am reluctant to expend the energy.  And it seems that Cora is following suit.  If there's an easier way to do something she'll likely find it.  Or she simply won't do it all until she's darn good and ready.

Happily, she has been making progress in gross motor recently.  On her birthday, she began to pull to stand regularly.  In the past she could do it, but seldom did.  Especially if anyone was looking.  But she seems to have figured out how to use her legs to get up, and is now pulling up all over the place.  Last week, cruising on the couch finally "clicked."  Although she could do it months ago, she just didn't.  But now she's learned that she can do it, and she's finally found the internal motivation. 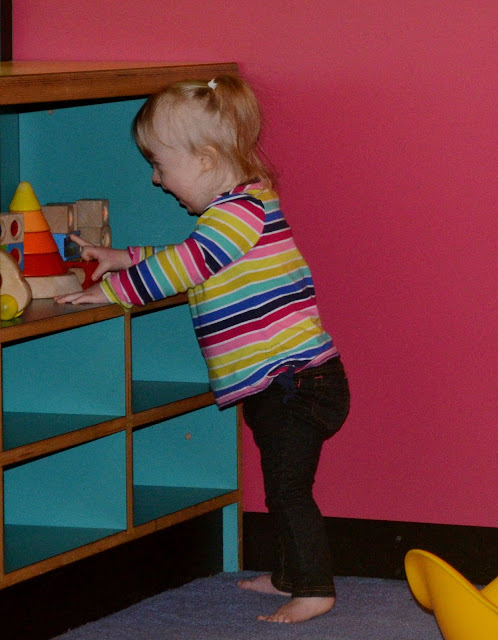 We still need to work on independent standing, bending her knees more (especially when sitting down), using a push toy and increasing her overall stability to move her toward walking.  It may take a while yet.  And with Cora it is so hard to say.

I've learned that it's really all about waiting until she's ready.  Trying to wait patiently and not get too frustrated seeing 6 month old babies doing things she's just now doing at 2.   Pushing her to do movements that she doesn't want to do doesn't work.  When she wants to, she'll figure it out.  And she's doing it; albeit very slowly.

For the record:  this is pretty much just my thoughts on Cora's gross motor skills.  I am fully aware of her strengths in other areas: signing, social skills and interaction, and extreme cuteness, to name just a few.
Posted by Leah at 11:30 AM

Email ThisBlogThis!Share to TwitterShare to FacebookShare to Pinterest
Labels: Development, Down syndrome