Could She BE Any Cuter? 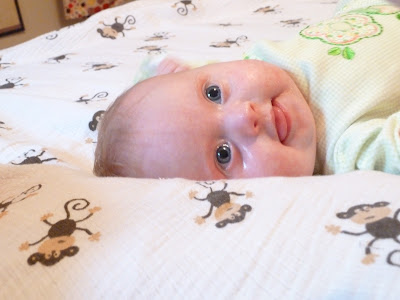 Yesterday was a fairly eventful day.

We started out by checking into the Diagnostic Center at Legacy Emanuel Hospital at 8:00 am for an upper GI scan, barium swallow study and chest and lung x-rays for Miss Cora.  They had called to confirm the appointment and left a message telling us that she shouldn't eat for at least a couple of hours prior to the appointment.  So she went in a little hungry.

And she did great!  It was a very long appointment. First she got to drink the yucky-looking thick clay-like barium drink through a bottle and we watched on the screen as it made its way down to her little tummy.  The staff present (doctor included) seemed to think that all looked pretty normal.  She even displayed her reflux, gagging and vomiting, which, of course, kind of sucks, but in this case, it was nice to get it "on record."

Although it seems kind of odd, speech pathologists are the therapists that work with feeding in small infants, and the therapist that consulted with us at the Feeding Clinic a few weeks ago was there.

She told us that Cora has a hyper-sensitive gag reflex (and of course Nick says he could have told me that!) and that her gagging starts the cycle of choking, which, along with her reflux, seems to be causing her all the trouble.  She also gave us some techniques to de-sensitize her mouth.  So it's nice to have some more tools in our belt.  She doesn't think thickening her liquid is a good idea for her (Yay!  Don't want to use that crap if we don't have to) and thinks that if she's in pain (which she is) then we could try the Zantac again.  So I think we'll start another trial of it tomorrow.

Then they had to take pictures of the liquid going through her digestive tract all the way to the large intestine.  Apparently with babies it usually happens pretty fast but with Cora it seemed to take forever.  We didn't get the go-ahead to leave until almost 4 hours after the beginning of her appointment. Too bad for Nick's work schedule today!

And impressively, we got a phone call from her pediatrician a few hours later, telling us that the scan was pretty normal, with no anatomical abnormalities, other than her slow lower bowel, which is not unexpected in people with Down syndrome.

So after all of that, it's pretty good news.  Nothing dire, nothing that needs surgery, etc.  But it also means that we just have to live with her crazy reflux and gag reflexes.  We're hoping that with our new insight we can minimize her gagging/choking fits and hopefully help her eat.  Maybe the medication will help as well.  But it's not going to be an easy fix, for sure.

In way more fun news, Miss Cora Bean decided to start smiling huge open social smiles at her Daddy yesterday!  Woo hoo!  The timing was kind of unfortunate though.  We had just put her on the bed to change out her NG tube when she started grinning at Nick.  I, of course, run for the camera, but I never got the best smiles recorded.  But it's quite exciting, because I know that we can look forward to many more of her smiles! 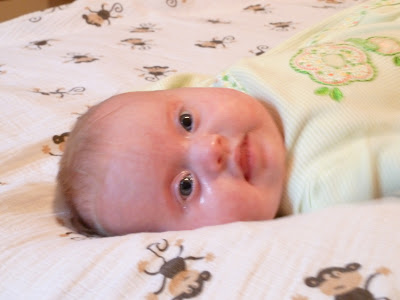 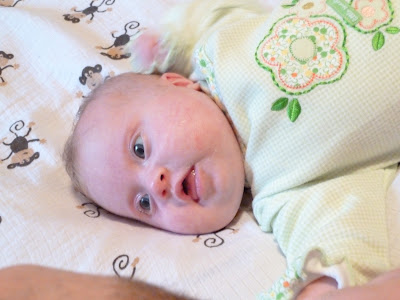 And then, we became the traitors, as we tortured our poor girl by putting in the NG tube just minutes after she dazzled us with her smiling.  Talk about feeling guilty!

In a week we'll meet with her cardiologist, and we should find out then when her surgery will be.  But probably in April some time if his prior estimates were accurate.  Yikes.  As much as I've been looking forward to having it done, I had a vision last night of handing my baby over to the doctors while she is wheeled away to be operated on.  And that did not feel good.  I know that it won't be a fun day.  But we are looking forward to the results, for sure.

Now I'm gonna go try and get some more smiles out of her!