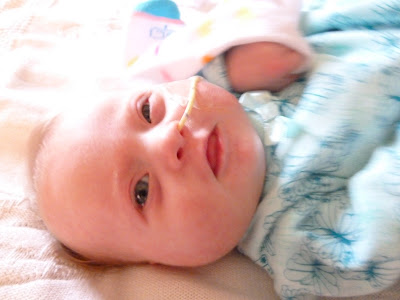 It's officially 2 months ago today that our little Cora was born into our lives.  What a whirlwind it has been.  These days, life has settled into somewhat of a routine, with variety added in the form of doctor's visits and minor tweaks to her feeding regimens.

Her NG tube was put back in earlier this week, and with that, we've happily experienced a big reduction in stress.  While it seemed like a daunting decision, by the time the tube was in the decision had been made for us by our little girl's dwindling intake by bottle.  Now, whatever she doesn't eat we can put through her tube.  She is still experiencing considerable problems with reflux and vomiting though, and we're currently in search of some answers.  After speaking to her new pediatrician yesterday (yes, she called me on a Saturday!) we've decided to do an upper GI exam and a swallow study, as well as some additional x-rays to determine whether her heart and lungs are involved.  Hopefully there are no significant structural abnormalities that could be causing her difficulties, but at the same time it'd be nice to have some insight or explanation.  Her pediatrician doesn't think that a change in medication will be of much help.  After about a week on Zantac we decided to stop it, since the amount of vomiting seemed to increase during that time.  But it's so difficult to tell what is actually affecting her reflux.  We're currently on a test-run of removing the formula fortification from the breastmilk, and relying solely on the additional fat we add to her milk.  Of course, we'll monitor her closely to see if her weight gain slows, as we don't want to compromise her growth.  But it seems worthwhile to evaluate the things that we can control on our own.  It just doesn't seem like there are any concrete answers so far.

More than anything, I am disturbed by the heaving, the gagging, retching and vomiting that can go on for several minutes and usually leaves her upset and absolutely exhausted.  It often takes up precious feeding time and then leaves her too tired to finish a feed.  But thank goodness for the feeding tube to help her finish.  Of course, simply using the tube doesn't mean she won't have one or more of her fits.

But we are very pleased to report that as of yesterday she now weighs 8 pounds 8 ounces!  So she's definitely still increasing her weight, which we are very excited about. 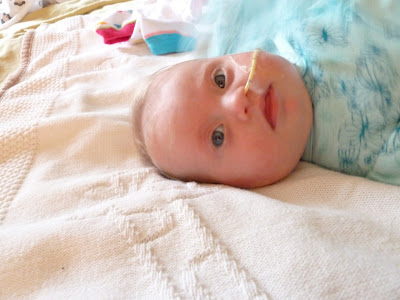 She's turning into a veritable little chubster, our girl is.  The cheeks alone speak volumes, but her little arms and legs are starting to display sweet pudgy little rolls as well.

In terms of other development, she's getting close to smiling real social smiles.  For now we get glimpses of her smiles, but they are fleeting and difficult to predict, and almost impossible to duplicate.  I've come close to photographing a few, but she always seems to leave me hanging.

It's been so much fun to watch her start to grow up into an older baby, capable of lifting her head, interacting more and more and having fun playing silly games with her daddy.  She loves to be changed (diapers and outfits, thank goodness!), loves to dance around the house, loves to have her arms and feet played with during songs, and adores her swing.  Last weekend we had to make an emergency trip to Babies R Us when her original loaner swing broke down.  Don't know what we'd do without it.

But we're also seeing signs that her heart condition is worsening.  This week it became obvious to me and Nick that her complexion is paler.  She seems to be more labored in her breathing at times, and seems to be more exhausted by the efforts of feeding and vomiting.  It's hard to believe that she could be having her surgery in just a few short weeks.  We still don't know when for sure, but after her cardiology appointment at the end of the month we should know more.  Most likely we're looking at some time in April or possibly in May.

It's nice to take a moment to reflect while my little sweetheart snoozes peacefully in her swing.  Getting ready for her next bottle/tube in about half an hour.  So I'm gonna go give my little beauty a kiss, while I prepare to feed her and the rest of our little family.  Lots of love to everyone from me, Nick and our little Bean. 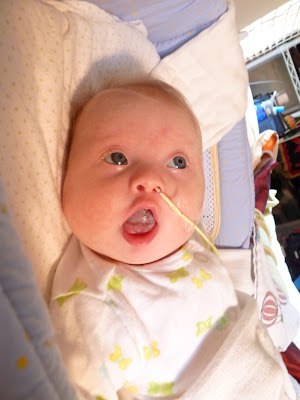