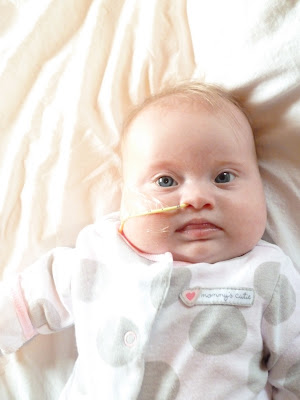 So yesterday was the much anticipated cardiologist appointment.  We were eager to hear what her doctor would say.

Last week I called and spoke to his nurse, telling her about Cora's increasing symptoms:  heavier breathing, sweating more, pale skin, nostrils flaring more.  The nurse spoke to the cardiologist and called us back, telling us to increase her Lasix dose a little bit, and told us to plan to schedule her surgery at her appointment.

So we knew it was coming, but we didn't quite expect to hear what came next.  He told us that her symptoms are definitely increasing and that it's time to schedule the surgery.  Of course, we agreed, thinking we'd probably be looking at least 2-3 weeks out, but he told us he'd like to do it early next week.  Like Monday or Tuesday.  So we scheduled for Tuesday.  Just 6 days from her appointment.  I'm not sure how common that is, but it seems like most of the families I hear about have to wait longer than that.

In many ways, it's great.  It means that it will be over soon.  We've been waiting for this ever since her echocardiogram in the NICU the day after she was born.  But it always seemed like the future.  It's nice also that we don't have to anticipate the date for weeks to come, like many other parents do.

But it also brings all my anxieties, nervousness and fears right out into the forefront.  I've been consciously and unconsciously spending a lot of quality time with Cora for the past several weeks.  If she's awake, she's usually with me during the day.  Even if that means just lying next to me on the couch while I pump.  I've been wearing her in the baby carrier, snuggling with her for naps, and being ridiculously goofy in my attempts to get her to smile.  I know that infancy goes by so quickly, so I've been trying to really appreciate her.  To be happy she's not napping so that I can interact with her, even if it means ignoring the other chores that beckon endlessly.  And now, of course, I just want to hold her tight and not let her go.  The thought of handing her over to the surgeon seems so impossible, even though I know it is necessary and will benefit her so much.

But this morning she is very tired.  Last night she was more fussy than usual, so I cuddled her to sleep for an early night.  Other than being woken for feeds, she slept right through and is now napping again after her last meal. 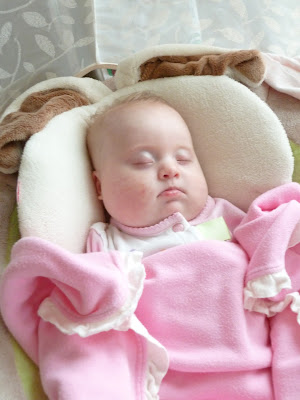 And I feel simply awful, because this morning after feeding her, I stood up from the couch without checking her NG tube.  It was stuck in a couch cushion, and stretched and pulled and came all the way out, pulling out from under the tape on her face but leaving it intact.  And it must have been painful because the poor girl screamed bloody murder.  For a whole minute or two.  Now for many parents out there I know that a minute or two is nothing.  But for Cora it sure is, and it didn't do much to soothe my guilty conscience.  Then after she was calm, Nick came and pulled the tape off her face and more tears ensued.

So we decided to let her go for the next few hours without the tube and Nick will put a new one in when he's home in the early afternoon.  Give the little girl a rest.  Not sure if it would have been better to do it all at once.  It's so hard to put your baby through misery.  No matter what it is.  Shots at the doctor, shoving a tube up her nose down into her stomach, or handing her off for open heart surgery.

So for the next 5 days I'm trying to hold it together, to give my girl all the love I can, and to visualize us seeing her after surgery with wide open beautiful blue eyes.  To picture her beginning to eat well, and grow, and not struggle so much just to breathe.  To grow and to thrive and to get an amazing chance to start over, good as new.

Please keep our girl in your thoughts, and if you pray, in your prayers.  She is strong and lively and wonderful, and I know she will do just fine, but I do believe in the power of prayers, and all of yours are appreciated. 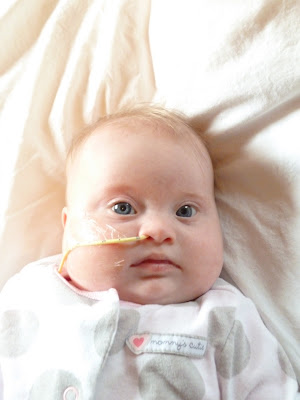