We had a nice time in Auburn with my parents over the weekend.  Except that Nick was stuck upstairs doing homework the whole time.  But Cora and I had fun.

We went over to Brett and Annette's on Saturday evening for a backyard fire and some yummy jambalaya.  Cora had a great time with all the attention.  Miss Tia couldn't get enough of her and even gave her a bag full of books and toys.  So sweet and generous.  But she was a little worried that Cora was going to throw up on her.  This may be because the last time Tia met Cora she was suffering from pretty bad reflux.  Tia told me that it was because Cora sticks her tongue out a lot.  I told Tia that Cora shouldn't throw up on her and I asked her to make sure she didn't throw up on Cora either.  That seemed to relieve her nerves about it.  Somehow I don't have pictures of Tia with Cora.  Probably because I was helping her hold Cora upright the whole time.

Cora LOVED gazing at the fire, which came as no surprise to any of us, since we are a fire loving family and always have been.  I'm sure it will be the first of many fires that will captivate her. 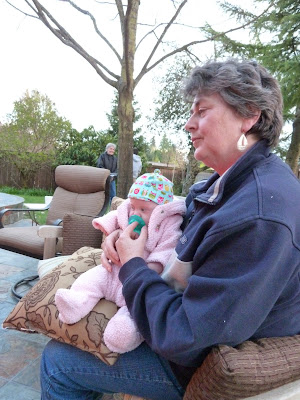 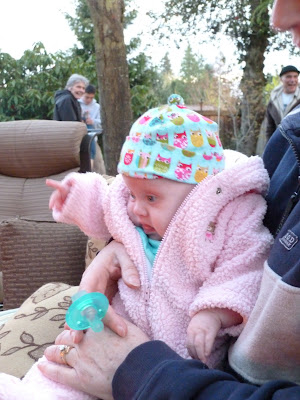 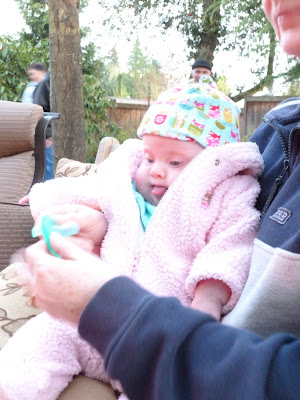 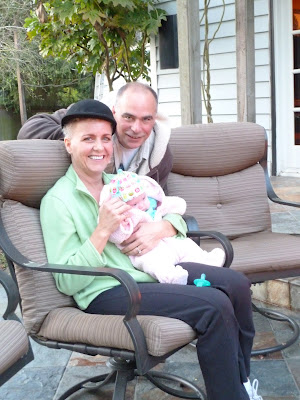 The next day she went in the hot tub with me and her Grammie.  But we need Grammie to send us those pictures.

We're getting back into the swing of being at home.  Yesterday Cora helped me transplant tomato seedlings and get the garden ready for planting.  She helped while sleeping and babbling in the Baby Bjorn and in the Boppy seat.

Now we're getting ready for a visit from Rachel, one of my best friends and Cora's honorary aunt.  We've had to re-schedule a couple of planned visits already so we're really excited to see her this time.

Little Bean is actually taking a nap right now and has been sleeping for about 45 minutes.  Naps longer than 10 minutes are something to be celebrated around here.  Which means I really should be emptying the dishwasher,  making Rachel's bed and cleaning up the rest of the house.  Or getting into the garden during the brief breaks in the clouds.  So I guess it's off to be productive. 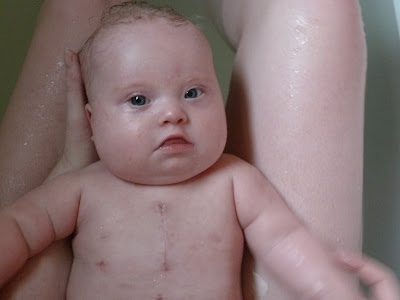 Cora and Mumma in the tub.  You can see where she gets her white white skin!
Posted by Leah at 12:28 PM