This Little Bean of Mine 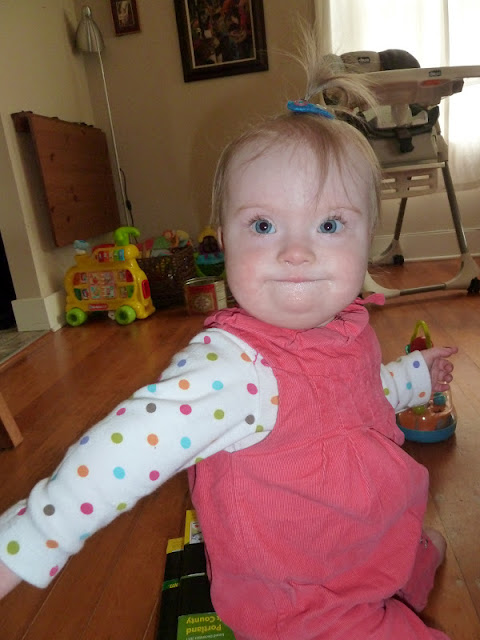 I realize that I haven't been posting many updates on the skills and accomplishments of my little girlie.  This has been brought to my attention by the number of questions I get from my parents, and the word-of-mouth sharing that's going on.

But Cora has been kicking some serious butt lately.  Her cognitive developments just keep coming.  When it rains it pours, I guess. 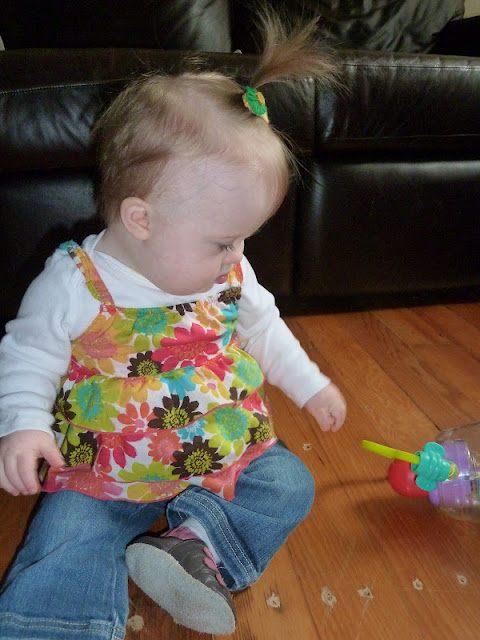 I mentioned a couple of weeks ago that she had started signing.  She is definitely keeping it up.  Although she doesn't really like to sign on command, she does sign appropriately, and sometimes secretively.  On several occasions I've caught glimpses of her in her car seat, practicing all her signs and staring intently at her hand.  This is so impressive to me, mostly because she's always been so interested in doing things with my hands, but not with her own.  So it's pretty great that she uses her hand to sign.  She signs "milk", "more", "all done", "Daddy" and waves bye-bye.  And it's obvious that she understands many more than that, but isn't quite ready to do them.  When I sign to her, she gives me the biggest smiles. 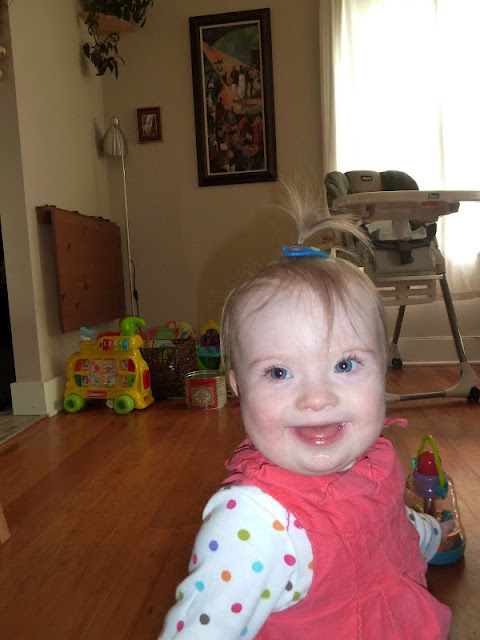 She is also pointing (with my finger) to a lot of body parts, both on me and on her, and on her Body Book.  When prompted, she'll point out all the different facial features on the two of us and on the various babies in her book.  Last week, after being introduced to the song "Head, Shoulders, Knees and Toes" a few times, she opened her book and pointed to the baby's head, then shoulders, then knees, then toes.  Repeatedly.  Obviously asking me to sing it to her.  So I obliged.  She also knows the motions to all her favorites songs (some are legitimate, some I make up, some are signs.)  She will move my hands into position to tell me what she wants to sing.

It seems that she is recognizing pictures in her books, based on where she looks and points when we read.  She is also really enjoying her BrillKids Little Reader program and is paying attention very well, which she didn't do initially.

She is starting to follow simple directions.  She is improving her eating skills.  She is vocalizing a lot and says "Hi Da" at appropriate times (although she calls me "da" too!)

But this girlie does NOT like gross motor play.  Or moving.  Much at all.  Stubborn, much?


She took some steps backward after her surgery and recovery, and now it's serious work to get her to army crawl 2 feet, whereas before she would army crawl across the room.  She is still very resistant to bending her knees (which prevents her from 4-point crawling, kneeling, pulling to stand except from bench sitting, climbing stairs, moving into and out of a sitting-position, etc.)  So we're working on that.  She has earned the nickname "Lumpy" from my family, since she is perfectly content to sit still and be catered to.


But the good news is that she's pushing all the way up on her arms more, so she's building back her upper body strength, and she is not locking her knees when she stands now.  This actually makes her more unstable, but bodes well for a future of knee bending and possibly moving onto other milestones.

As for sleeping, well, I've been hesitant to post much, since it's still evolving and I don't want to jinx anything.  I will say that she is breathing better post T&A.  She isn't having episodes of apnea that I can tell, which is great.  She does still snore occasionally.  But she's still waking.  Some nights are better than others.  She's been whining in her sleep lately (teething, maybe?), so we'll see.  So far, not a great deal much more sleep for the weary folks in my house, but we're still working on it.

So that's it for the State of the Bean in my house.  She is excelling in the CUTENESS department, for sure. 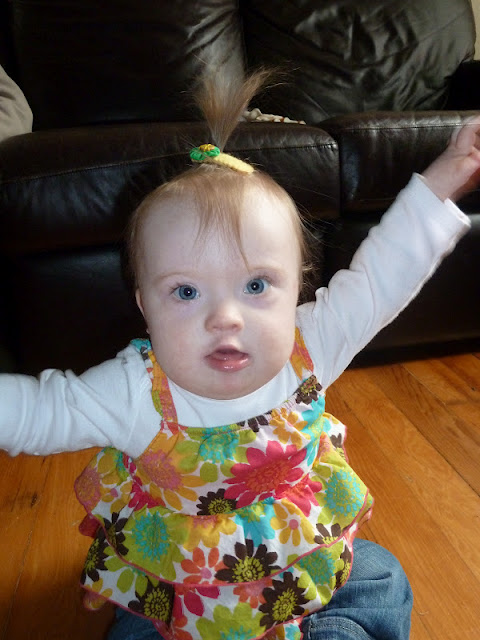