15 Months Old- State of the Beanie 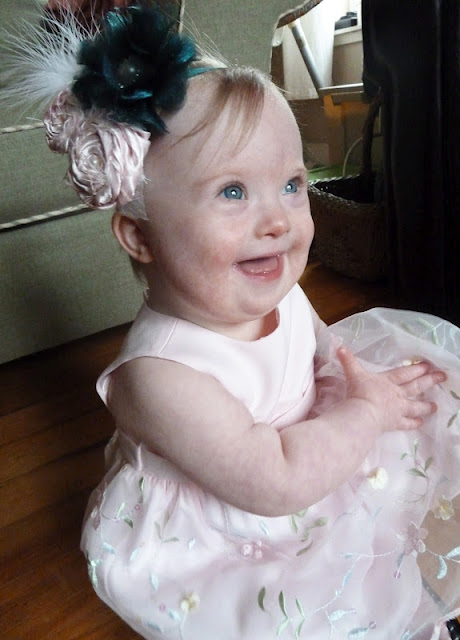 For Cora's 15-month day, I thought I'd post a few updates on what she's doing and where she's at these days.  So, without further ado, 15 things about Cora!

1.  Cora’s signs right now include “more”, “all done”, “milk”, “mommy”, “daddy” and “bye-bye”.   The most common one is “more”, which she pretty much does all day long.  Last night while snuggling up on the couch she repeatedly and intentionally signed mommy and daddy, grinning all the way.  Be still, my heart!

2.   Cora has been sneakily starting to speak.  But, in true Cora fashion, she doesn’t speak on cue, and not all that often, so it leaves me wondering.  And some of her newest words were said to someone other than me.  So I’m still waiting to hear a couple of them.

The other day, while watching Baby Signing Time with her Daddy and talking about hats, she looked up and him and clearly said “hat”.  Complete with the “t” at the end.  Then she did it again a few minutes later.

Yesterday was a major milestone day for speech.  At the end of the day, Cora had added 3 new words/expressions to her speaking vocabulary.

At the pool, while her Favorite Auntie Mira was trying to pacify her while I dressed, Mira said she clearly said “mama” while reaching for me.  I didn’t hear it, but I have to take Mira’s word for it.  She's been saying "dada" for a while now, often saying "Hi da da!"

And yesterday morning, while changing her diaper, she repeatedly said “poop”.  It was a funny way to say it, since she made a raspberry sound with her lips to form the “p”, so it came out like “pppp-pp-ooooooo-ppp-p”, but it was clearly “poop”.  Ha!

And last but not least, after she finished nursing and I signed and said “all done”, she said “aah duuh”.  No consonants at the end, but it was pretty clear nevertheless.

3.   She knows body parts, and can often correctly identify colors and animals.  Typically she demonstrates what she knows by using my finger to point to a picture of the item in question.  Or she’ll point to her body or mine.  Most of the time, I avoid directly asking her where something is, but I will name other things and then name the item in question.  If she’s in the mood, she’ll point it out.  But she’s not always in the mood.  And other times, she’ll play jokes.  Like last night when I said “eye” and she pointed to her toes.  When I said, “No, Cora that’s your toes, where is your eye?” she grinned and jammed my finger into her eye.  It’s so freaking cute.

4.   Her favorite foods are Cheerios, veggie stix, and plain greek yogurt.  She happily eats most of my homemade meals, if they’re pureed.  She doesn’t mind different textures, but has a hard time swallowing things with chunks and needs assistance washing them down with a thinner puree.  We’re working on it.  She will self feed crunchy things, but refuses to touch anything mushy, liked cooked fruit or veggie chunks.  She self feeds with a spoon with assistance when she’s feeling like it.

5.  She still gets at least 50% of her food via nursing.  She is not giving that up anytime soon!

6.   She loves to read, nestled in my lap, helping me turn pages and pointing at all the pictures.  She also loves her BrillKids Little Reader reading program and singing songs with me. She knows the motions to her favorite songs, and makes my hands do them to tell me what she wants to sing.

7.  This week she army crawled maybe 12 inches total. Yes, the girl that army crawled across the room 3 months ago is pretty much not doing it at all now.  But she is managing to push herself backward all over the place, a fact which upsets her often.

8.   She is getting better at standing, but needs to hold on and is still pretty wobbly.  Her therapists are convinced she needs orthotics, so we’ll be going through the process of finding good supportive size 1 shoes soon, along with getting her itty bitty feet fitted.  She can pull to stand when sitting on a step or a little bench, but not from the floor yet.  Another milestone she is avoiding since she refuses to get on her knees.

9.   She is still in love with going swimming.  Seriously!  She yells herself red most of the time, kicking her feet with gleeful abandon and practicing her moves.  She definitely is not afraid of moving in the water, and even likes to be dunked.

10.  She is a mama’s girl, often crying big crocodile tears when she is set on the floor.

12.  She is great at playing ball, throwing and rolling the ball with her hands and feet.  Yes, this girl is pretty good with her feet.

13.   She is a little ham.  Once she warms up to people she’s often all grins and babbles.  She is a people magnet and draws smiles and comments everywhere she goes. And she loves to show off her silliest faces when she's really happy. 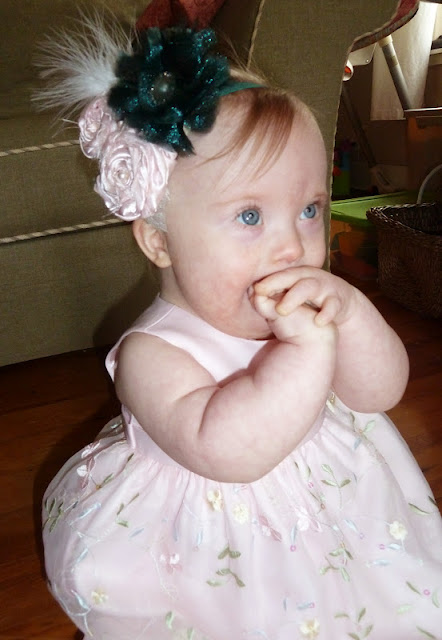