Wrapping up our Week 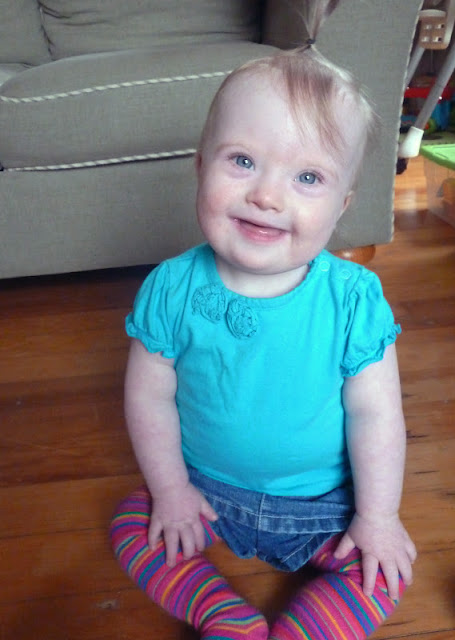 Wow, has it really been almost a week since I've posted here?  It's been a typically busy week for us.  Story time at the library on Monday, me going into the office for a couple hours on Tuesday, swimming on Wednesday, play date with some adorable little friends who sports an extra 21st chromosome (plus a new little 12 week old friend who is SOO cute) on Thursday, and seeing a live music puppet show on Friday.

But almost no pictures, oddly.  Cora has been entertaining herself by inching around a bit on her bottom.  I had a laugh when she got herself stuck on the corner of a bin.  This is something that I had hoped we would avoid... the butt-scoot instead of the crawl.  But my stubborn girl will not be swayed.  Yet.  We're still working on it.  She is in general getting much more control and stability and even occasionally lets me get her on hands and knees.  So I guess she's still making progress.  We've taken out the crawling track again, and she will move down it with enough cool toys at the bottom, so that is good.

This week she said "bubble" and "bye bye." (Quite similar sounds, actually. "Bubble" was "buh buh.")  I can tell she's working on saying other things, since she'll practice in her stroller and carseat.  She'll repeat different syllables over and over again, pronouncing each one separately and emphatically.  "Ba. Ba.  Ba.  Da.  Da. Da."  But so far she is mostly mimicking, rather than using words to communicate at specific times.  Although a couple of days ago after a diaper change she flapped her arms, spontaneously declaring "ah duh!" over and over (all done!)

Hmm, what else?  She's working on feeding herself with a spoon and is getting a little better at it.  Though she does have a tendency to fling.  Oh yeah, and last night she decided it was fun to feed herself lasagna with her hands.  This is new for her, since so far she has only wanted to self-feed crunchy things, rather than deign to touch gooey messy smooshy stuff.  So that's something new-- new tactile information and a new way of feeding herself.  And the fact that she is gradually able to swallow things with more chunks (like the soft small pieces of rice pasta with meat sauce and some cheese) makes this possible as well.

And today, we went to the zoo for the first time as a family.  This is Cora's third time in the last few weeks, since we just got a zoo membership.  But today was the first time Nick could make it.  It was a beautiful afternoon, which was quite a novelty around these parts.  So far, it's still a little tricky trying to get her to notice all the animals we're looking at, yet alone trying to photograph her with any animals.  But here are a few from the zoo today, anyway.


So far it's been a good weekend.  And we're looking forward to another gorgeous day tomorrow.  Unfortunately for Cora and for me, that means full body sunscreen, hats and not very much time in direct sunlight.  Yes, it's a liability having white white skin.

But at least we're in good company.

What kinds of fun are you having this weekend?
Posted by Leah at 4:22 PM

Email ThisBlogThis!Share to TwitterShare to FacebookShare to Pinterest
Labels: Development, Family and Friends