My Connection to Disability

What is your connection to disability?

This is the question put forth today by Meriah, one of my all-time favorite bloggers, mamas, writers and all-around people that inspires me to think and to feel.

There is a simple answer to that, of course.  My obvious connection is my daughter, Cora, who has Down syndrome.

But there is probably a less obvious answer, as well.  An answer that I am still discovering.  After Cora's diagnosis, I initially felt overwhelmed and unprepared.  What did I know about Down syndrome or disability?  I had never known anyone with Down syndrome, and had never been around people with disabilities much at all.  In fact, I'd been criticized by my dad for not being very patient for people who weren't as smart as I was.  His criticism didn't apply to people with cognitive disabilities, really, just ordinary people that may have made me work a little harder.  But still, it gave me something to think about, especially after Cora was born.

I was taught to be kind and accepting toward people who are different.  After hearing my dad's stories as a little girl I felt it was my job to be friends with the kids that didn't fit in (funny perhaps, since I was so shy and tiny myself and often took a while to make friends after most of our moves).  I remember a friend in second grade named Robin who had a mild cognitive disability.  I remember another girl in sixth grade who ended up being rather mean.  For some reason that surprised me, to find that "different" didn't always mean sweet.  For a brief period while our parents spent time together, we had a friend who was deaf.

Although I made efforts to be nice in general, I will admit that disability wasn't always comfortable for me.  Disability really just seemed so distant, in a way.  It was seldom front and center in my life.  It was something that I didn't give much thought to and that I felt impervious to.

Before Cora arrived, I never once believed there could be a possibility of anything being "wrong" or different about her.  Several years before she was born, my husband confided that one of the reasons he was nervous to have children was that he had always had a feeling he would have a child with a disability.  I assured him that there was practically no way that could happen.  Quite funny now, really.

So when I recognized Down syndrome when I first gazed at the face of my newborn daughter, I was completely shocked and surprised.  I felt ill-equipped for a few hours, I am sure.

But within hours, the realization that she was meant to be with me exactly as she is began to permeate.  I began to feel like something that I had always been waiting for had arrived.  And not just the role of motherhood or the birth of my first child.  I began to feel that her "disability" was going to change my life into exactly what it was meant to be.  Maybe that seems a bit "woo woo", but the feeling was powerful and continues to this day.

The fact that Cora has a disability is sometimes evident.  She demonstrates delays and she's learning to do things a few steps behind most of her typically-developing peers.  But she is developing all the same.  She amazes me with what she is learning on a daily basis and with what she shows she understands.  My girl may learn and develop a little bit slower, but she is capable of so much.  She's already changed a number of lives.  As far as I am concerned, the sky is the limit.  And that goes for me too, since I am learning and growing each day along with her.   I am honored to get to witness her life.  She is transforming me into a truer version of myself. 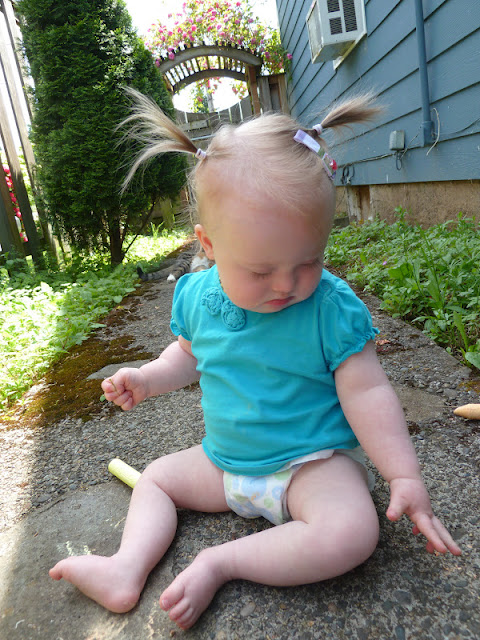 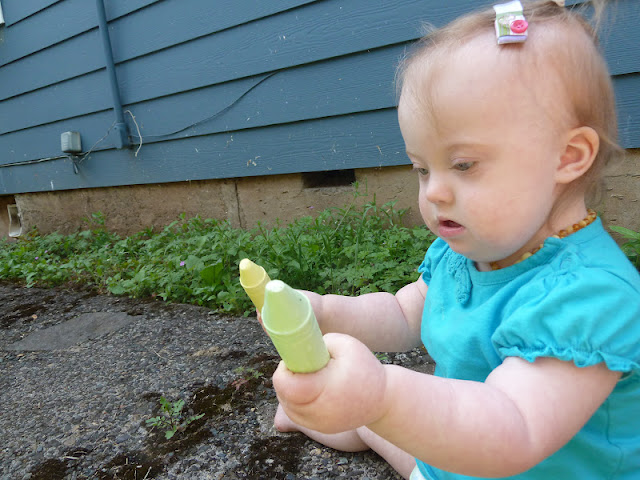 Thank you Meriah for hosting this blog hop!  You can visit her blog, With a Little Moxie to check out other blogs that have linked up and to read more of Meriah's posts and get some glimpses at her adorable kids.

Email ThisBlogThis!Share to TwitterShare to FacebookShare to Pinterest
Labels: Down syndrome, Thoughts from Mum