Using Sign Language with my Daughter with Down Syndrome

Little Cora Bean is a pretty enthusiastic signer.  I often get questions and comments on signing with her, so I thought I'd share a bit about our experience so far.

Using sign language with Cora is something that I decided I wanted to do pretty early on.

Although there are still some people that feel that signing can delay speech by causing a child to rely on signs to the extent that speech doesn't seem necessary, the information and research out there overwhelmingly supports the use of sign language with children.

I personally felt that adding a second language could only help benefit her early learning.  And with all the information telling me that people with Ds are typically visual learners, and that speech can often be significantly delayed, I wanted her to have a way to communicate early on.  From my reading, I felt that Total Communication (using signs, visuals, pictures, etc. at the same time as the spoken word) would also help to enhance her understanding and command of spoken English.

Cora started watching the first episode of Baby Signing Time at about 8 months old.  She loved it.  She would get excited and watch, enraptured.  I learned those 20 or so signs and started trying to incorporate them into our lives.

But it was hard to remember.  I felt like I wasn't being very consistent.  So I started incorporating the signs I knew while reading books and singing songs to her.  It seemed to make it more exciting for her, and it helped me really learn the signs and get into the habit of using them.

For several months Cora watched the first episode daily.  Around 12 months old, she got a few more and we put them into rotation.  Although at first I was concerned about overwhelming her with too many signs, I began exposing her to a variety of videos and signs.  It seemed that she was quietly taking it all in, like any child does as they begin to absorb and learn language.  Language learning is not done in just a few words at a time, even though that may be all a child is capable of expressing.  I felt that she needed to be exposed to a rich variety of signs and vocabulary and that eventually it would pay off.  She was getting lots of input, but we still made an effort to focus intently on specific signs for a couple/few weeks at a time.

Eventually she began to show us what she was learning.

She began to sign at about 13 or 14 months.  She used just a few signs for several months, (milk,eat, more, Daddy, all done).  And then suddenly, she began to show me that she knew many more.  She'd  often debut 5 or more new signs a day.  They really had been sinking in all along.

Although my recent estimates put her vocabulary at over 500 signs, she continues to learn more all the time.  To supplement her Signing Time addiction, we look up new words on Signing Savvy. She is starting to string together word after word after word, in long random and excited sentences, leaving her mama (typically fairly good at interpreting her) in a confused haze some of the time.

I admit that her fine motor isn't perfect and that a lot of her signs look alike.  There is still some guessing involved.  And even though she has the tools to communicate with me pretty well, some times that's just not what happens.  It can sometimes take effort to draw out meaningful communication.

But she is communicating.  And that's a big deal for a girl whose speech is coming along fairly slowly.  She is beginning to use her word approximations with signs and to vocalize more and more.  And I know that one day, as she gets better at communicating with spoken language, she will likely start to use signs less and less.

I know that for many parents of children who do have or who are likely to have speech delays, signing can seem daunting.  It's hard to know how to start, and many kids aren't immediately enthusiastic about it.  For some children who are really movement-driven, getting them to sit down long enough to watch a video is a challenge. (Watching DVDs in the car can make for a captive audience.)  There can definitely be some hurdles.  We were lucky that Cora has been so interested and I am sure that is why she has taken to it so well.  But I am seeing really good progress in kids that weren't nearly as interested, even as their parents have relaxed their pace to reflect their child's motivation.  Sometimes it takes a while for our kids to show us what they have learned, but they are learning all the same.

From my perspective, teaching my daughter and my family to sign has been one of the best decisions we have made so far. 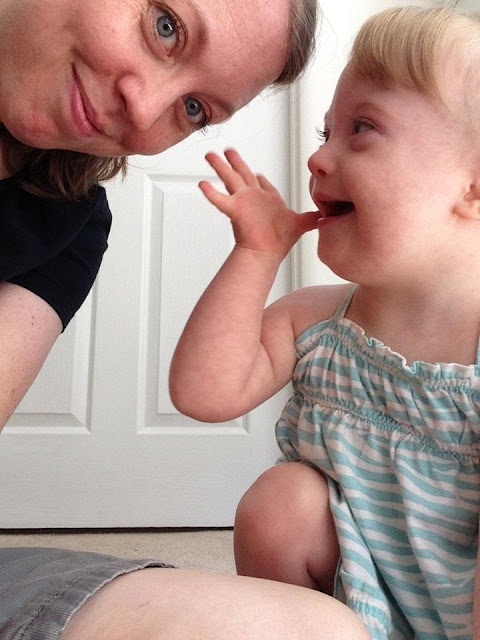