Adventures in Feeding, Then and Now 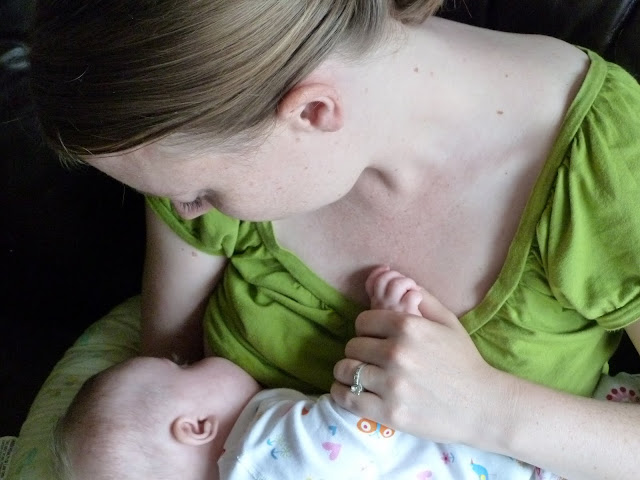 Now that Miss Cora is 6 months old, I realize that her life is divided in half for me.  The first three months before open heart surgery, and the last three months since.

Like I've said before, it really is night and day.  While we were waiting for surgery, it really did feel that the waiting and the fear would go on forever.  It seemed impossible that it would be behind us.  And now it almost seems like an imaginary time.  The struggles she faced before surgery now seem so distant.

But even though it seems like ancient history already, it has definitely colored my feelings about our life today.  I think that I really appreciate our day-to-day more than I may have otherwise.

Anyway...  I got to thinking about feeding Cora again today.  The first post I wrote in this blog was about feeding her.  Because for the first 12 weeks, feeding Cora was the focus of my life: the horribly stressful, difficult, all-consuming focus of our lives.

Many other parents of children with Down syndrome can attest to this, and probably others as well, but feeding a baby with Ds, especially one with a heart defect, is very different from feeding a typical baby.  Imagine a baby that seems to have no sense that she is hungry, that doesn't wake up to be fed, or show any hunger cues, that doesn't open her mouth to eat, and that almost never takes her "quota".  For a typical full-term baby you may never even know that there is a quota.  But when the NICU doctor gives you a feeding schedule with intake requirements just to take your baby home and sends you to specialists at the Feeding Clinic it's a different story.  Especially when you know that the baby has to gain weight to have a surgery that she will die without.  Trying to feed your baby becomes quite a stressful event.

I remember hearing advice about how to know when your baby has eaten enough, and thinking that there was no way to apply that to Cora.  That Cora would starve if we left it up to her.    And she very likely would have.  I never imagined that things would really change.

And then, when we were working on breastfeeding and actually started her on breastfeeding after surgery, I was overjoyed but was still so worried and stressed.  How to translate all we'd been doing to breastfeeding, especially when it was so hard to keep track of it all?

All the information I received advised me to feed per demand rather than feed on a schedule.  But how would that work with a baby that didn't seem to know she was hungry?

Amazingly, it has worked out.  True, at first she did breastfeed on a schedule, but eventually she started to let me know she was hungry at different times, often more frequently than I would have otherwise fed her.  Gradually I increased the number of hours I would let her sleep at night between feeds and still she continued to gain weight.  We kept up a bottle or two a day of fortified breast milk for a few weeks, and we were able to let that go as well.  I gradually reduced my pumping as my milk supply reduced and evened out.

And now, our girlie is fed on demand (although I usually know how long it's been since she's eaten and will offer her food after a period of time).  She has learned to let me know she is hungry and I've learned to trust that I can read her cues.  She eats a lot during the day and then goes about 10 hours at night before waking up to be fed.  She hasn't taken a bottle in at least a month.  I even stopped pumping over a week ago.  And still she gains weight.  Our little Superstar!

And the best part?  Feeding her is no longer a stressful event.  I no longer feel fear in my stomach when it's time to eat.  I don't spend evenings crying because I can barely do the most basic mother's job of feeding my infant.  Now feeding is a fun time to cuddle, snuggle, and love.  And eat.   She finds it comforting too, which is natural, but is such a change. It is one of my favorite recurring parts of the day and I am in no hurry to wean her any time soon.

This adventure is so much more fun. 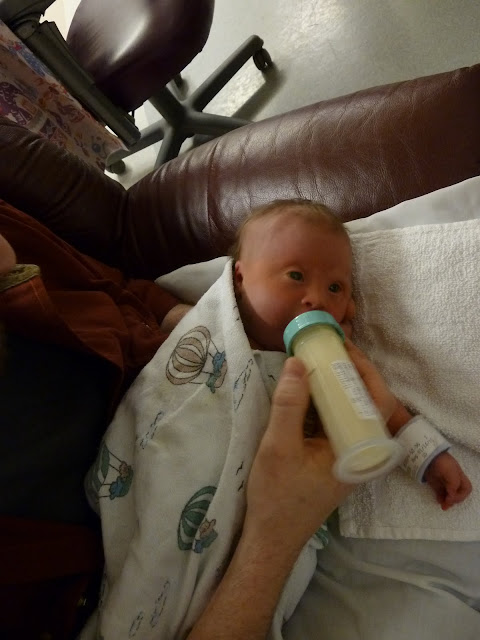