Last week we experienced a first.  A painful first.  A first that I knew we would one day see, but that I was hoping would be far in the future, or maybe, just maybe, in a perfect world, never happen.

Ah, but the world is never perfect.

At school with Cora while parent teaching in her classroom, I sat eating snack with a group of four-year-olds, when Cora asked for more bagel.  What she actually said was, "Dut, dut, dut... More bagel, please!"  She often uses this little repetitive sound when starting a phrase. Her speech therapist thinks it's partly habit and partly her mind and body trying to get things out too quickly. It's actually been really exciting because recently her speech at school has exploded. Whereas before she was shy about speaking, now she seems to want to talk to everyone. This is huge.  But it also means that more kids are actually hearing her talk, and realizing that her speech sounds different and can be hard to understand. Suddenly their quiet friend Cora, who as I've been told by several kids on multiple occasions, "doesn't really talk," is now talking, but in a new and maybe surprising way.

Immediately after Cora's request for bagel, one of her newer classmates imitated her speech, then proceeded to exclaim, "She sounds like a baby," and exploded into peals of laughter, which were echoed by the rest of the table.  Everyone laughed except for Cora, who sat quietly eating her bagel. I tried to interject a variation of what I often say when a classmate asks me if Cora is a baby or comments on a difference, "Even though it takes her longer to learn to talk, that doesn't mean she is a baby." Of course, my effort was lost in the laughter, and I sat there stunned and sad as the kids' conversation went from how they talked when they were babies, to potty humor and babies and many variations of four-year-old hilarity.  At that point I really didn't know how to respond.

I was so upset, but felt it couldn't really be addressed at the moment, with several kids all following their own tangents of silliness at that point. And I didn't feel equipped to handle it neutrally, since the feelings that had been hurt were mine.

I managed to get through the rest of the school day and brought up the incident at the daily debrief with the teacher and the other parent teachers. Coincidentally, Cora's teacher has just been reading My Friend Isabelle, (a book about two young friends, one of whom has Ds) the week before, and was in the process of helping the kids compile books on their individual talents and their struggles.  This lesson on appreciating and recognizing differences and similarities among peers had been actively going on. We ended our debrief conversation with a couple more ideas.

But it just didn't feel settled to me.  I went home and cried off and on through the afternoon as Cora and Ruby played together.  That night, I wrote more about my concerns to her teacher: concerns that the uproarious reaction it produced could lead to more of the same types of comments, concerns that even if Cora may not have been hurt by it at the moment that that could change at any time, and concerns that jokes of that kind could instill a climate where she is seen as "other" and separate from the other kids.

So we talked about solutions.  And honestly, there have been wonderful ideas that are being implemented. Her teacher is sharing social stories with several relevant messages. Parents have been emailed with ideas about how to talk to their children.  I have written suggestions on how to talk to kids about Cora and about Down syndrome, specifically.  Last year Down syndrome was never mentioned to the kids. It didn't seem necessary. The kids accepted the simple response that "She is not a baby, she is three like you, and she just takes longer to learn how to do some things."  That response was enough.  But it seems like now it is perhaps not enough. Now they want to know why, and what, and talking about Down syndrome seems like it should be part of that.  We are not ashamed of Down syndrome or afraid of the questions.  Cora knows she has Down syndrome. We are afraid of the laughter, the hurt feelings, and the making fun.  I am afraid of the potential for this safe and beloved space to become somewhere our family doesn't feel comfortable.

I am really hoping that won't happen.  For now it's being handled well, largely thanks to Cora's incredible, creative and nurturing teacher, and to the families in our school. Yes, there have been a couple of hiccups and some more painful comments, which shows me that addressing it now is important. But we are moving forward and using the opportunity to educate classmates and parents alike, and hopefully, to encourage more appreciation of differences for all involved.

There is no doubt that it has been painful for me. I've been solemn and a little sad. I don't love the role of the squeaky wheel, but I know how important it is for me to advocate for Cora to belong. And I know that out of the hurt there is a real possibility for so much growth. 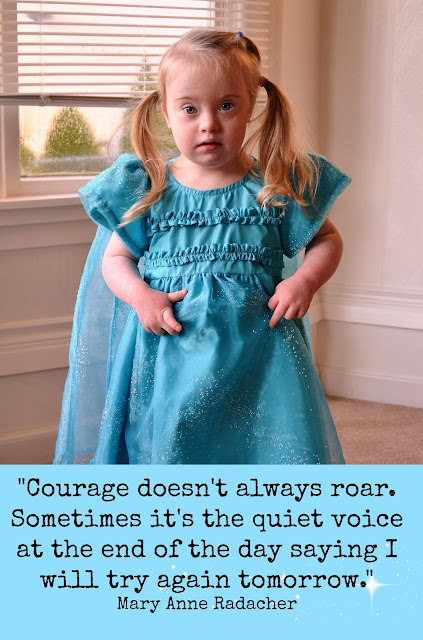 Email ThisBlogThis!Share to TwitterShare to FacebookShare to Pinterest
Labels: 31 for 21, Inclusion