Recently I've gotten comments about Cora that I wouldn't have expected in the past. Several of the other adults at preschool have been impressed by what a good eater she is.

And as surprising as it feels, it's true. These days she is a great little eater. Oh, she will often tell me, "I don't like it," as she pushes away a dish of food. My response is always the same. "You don't have to eat it," and then I change the subject. More often than not, by the end of the meal she'll have eaten some of everything on the table. That technique has really paid off with her. She's also done really well with having family-style meals, where she gets to serve herself from a few different foods on the table. We started doing this to model snack time at her preschool. When she began school last year I was floored by how independent the students were expected to become. Each day the kids set their own place at the table, serve themselves, pour their own water, and then wash their own dishes and put them away. I could barely imagine Cora doing those things at the beginning. Yet she does, sometimes with reminders to stay on task.  And following this model at home has been really successful for her.

Her transformation has been about more than reducing picky eating and encouraging more independence. It's also been seeing her physical abilities improve dramatically. For the longest time, Cora simply didn't have the strength and tone to eat food that wasn't soft or easily dissolved. She wasn't able to break down fresh fruits, vegetables, or meats.  Until well past her third birthday her meals consisted mostly of thawed cubes of various soups and stews, along with soft things like pasta, yogurt and eggs. She seldom ate the same meals that we did. Adding to that was her severe issue with FPIES, which has since has cleared up. Now she is able to have formerly forbidden foods like soy, beans, peas and peanuts. We no longer have to pack food for her wherever we go.  I can't even remember the last time I made her a separate meal. The options feel endless.

Of course it's not a perfect system. She still acts like the 4-year-old she is, requesting cheeseburgers, spaghetti, pizza and ice cream several times a day. Sometimes she asks for certain food, only to balk when it's on her plate. But in general her willingness to eat a variety of foods, and her ability to do so is night-and-day compared to where she came from.

Overall the process has been really exciting to see. Sometimes, especially when your child has developmental delays, progress seems to happen so slowly that it is hard to believe the next stage will ever come. You choose whether to wait it out with patience or whether to intervene with various therapies. Sometimes it's a hard call to make. In general, our family has tended toward a model that is not extremely therapy-heavy. We have learned that for us, time spent as a family without constantly running to the next appointment is more valuable than always feeling the urgency to intervene. We value the advice and perspective from the experts and do partake in a regular schedule of limited therapy, but much of the time we trust in her ability to get there with our guidance and support.

It's an ongoing process, and one that involves asking many questions, trying various approaches, and often doubting decisions. But even though sometimes it feels like a lot of effort, it is awfully rewarding. There sure is something thrilling about watching Cora move forward. She is absolutely capable of so much. I remind myself often to keep my expectations high. And at the same time I try to keep in mind that her abilities and accomplishments, as proud as I am to witness them, are not the real indicator of her value. That ultimately, regardless of what she is or isn't able to do, or when or how she does things, she is enough. 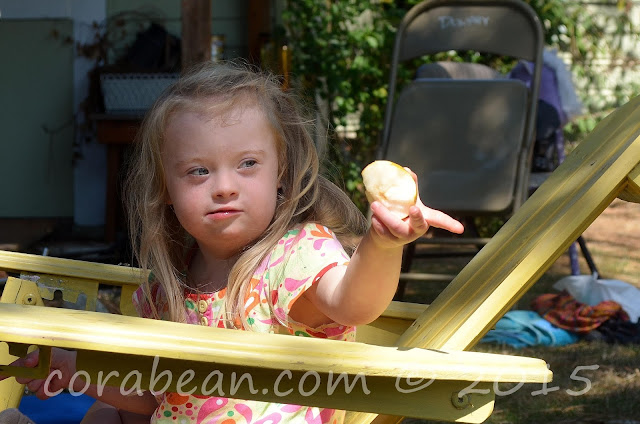 Email ThisBlogThis!Share to TwitterShare to FacebookShare to Pinterest
Labels: 31 for 21