For the last few days, we've been adjusting to our new lives.  Altogether, there are a lot of things that have remained the same, but there have been quite a few changes, as well.

Little Cora seems to have acquired new shades to her personality.  Namely, the shade that fusses and cries WAY more often.  She's usually pretty calm throughout the day, but when evening hits it's another story. Our once quiet and calm little girl, whose "fussy period" entailed a little whine until we changed her position every few minutes for a couple of hours, has now shown us how she can scream.  We've figured out a few things that seem to work to calm her down.  The obvious walking around the house bouncing her is hard to sustain.  On my sister Eri's suggestion, we've tried holding her while balancing on a gym ball.  That is also hard to maintain.  And now we've found that holding a pacifier in her mouth for an extended period of time can also help.  She will only take 1 pacifier, "Mr. Green" as Nick has dubbed him.  And she won't hold it in her mouth herself. But if I can hold it in her mouth for an hour or two I will.  A bottle will also keep her quiet for a bit.

Yesterday I discovered another new "pacifier" when I tried nursing her again.  We've been trying to introduce breastfeeding all along, but nipple confusion along with her pronounced gag reflex kept thwarting us.  Now that the surgery has drastically decreased her reflux and gagging (So amazing!) she's had a better shot.  So while trying to pacify her yesterday, she suddenly figured out how to latch on and suck.  Suddenly there was milk dribbling down the sides of her face.  This went on intermittently for about 10 minutes.  I am fervently hoping that we can replicate it today and that perhaps it could be the turning point that may open her up into real breastfeeding.  So keeping my fingers crossed.

But her shifts are also for the better.  Her little personality is so much fun now.  Her little smiley self has truly emerged after this surgery and when she gets to smiling, her little face and body can barely contain those smiles.  I'm usually holding her when this happens, so it's hard to get them on camera to convey the absolute cuteness.  But we'll work on it.

Her feeding habits, unstoppable at the hospital post-surgery, have again become more difficult.  She has the energy, but she doesn't seem to want to eat all the time.  Sometimes she'll horse around and wriggle, smiling her way out of it, and others she'll just fall asleep and we'll have to coax her to eat the whole time.  So overall, her eating is still much better, but still takes a while and can still be a little frustrating.

And her sleeping habits have changed, as well.  While she still thankfully sleeps soundly through the night (minus the times we wake her to eat), she's not napping nearly as much in the daytime.  This likely contributes to her wailing in the evening, and also makes it way harder for me to get things done, or blog about it all, or sometimes even breathe.  Go figure.

Thought I'd post a little sequence of a minute or two in the life of Cora, After. 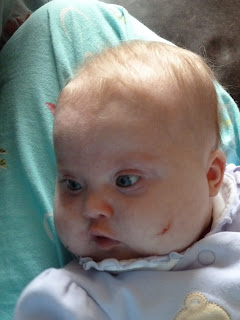 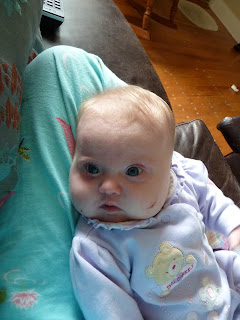 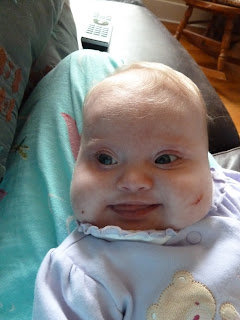 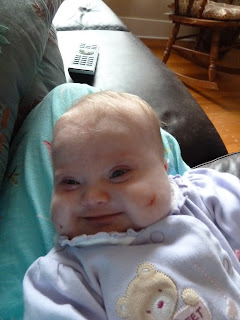 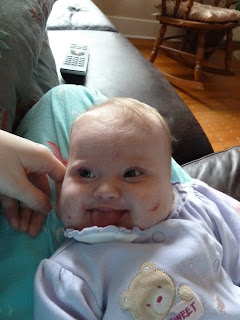 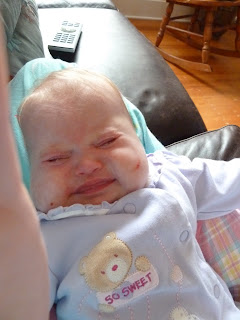