Day 2 Post-Op- Out of the PICU 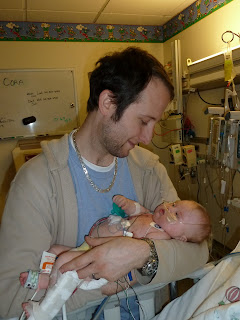 Sorry for the hiatus in posting, but I've been having trouble with the internet at the hospital.  Finally made it on with the help of Nick.

Good news...  Cora is now out of the PICU and onto the pediatric floor!  We are very happy about that.  She is overall doing very well.  Dr. Kyser came in to talk to us and told us that she's a "Superstar" with regard to her recovery so far and that she is doing great!  He expects that we should be able to take her home by Monday.

They took out her catheter this morning, and her NG tube yesterday. At this point she still has the nasal cannula for oxygen, electrodes monitoring her vitals, a couple of chest tubes, her central line, an IV and her pacemaker wires.   She's still pretty connected, but nothing like a day ago.

She's not quite ready to be off the oxygen yet.  They want her O2 saturation to stay above 92, and they dropped the oxygen by half today, but she's not quite ready to be off without dropping a bit.  Hopefully it's due to recovering from being off the ventilator and won't be a problem.  Her nostrils still flare a bit occasionally too, but the doctor isn't too concerned, since it doesn't look like her breathing is otherwise labored.  She is pink and vigorous for sure.

But the bummer today is that while I was sleeping away in the parent room last night (Finally, 7 hours of sleep!) she was doing so well and was so sleepy that the night nurse decided she didn't need any pain medication.  Can you imagine being not even 48 hours out of open heart surgery and not having ANY pain meds?  He must have been insane.  When I went in at 8 this morning, she was sleeping, but by 8:30 she was wailing.  And this is a baby who barely cries.  She will cry, but it may be a wail or two and she's always been very easily consoled.  But she wouldn't calm down.  The nurse gave her some more Tylenol and I fed her and she seemed better.  But then the IV nurse had to come by and redress her central line.  I was holding her at the time and the nurse wanted me to continue to hold her to help calm her down, but it didn't work.  The poor thing cried her little head off and it was very traumatic to her and to me.

Later, during feeding she was again crying inconsolably.  I told the nurse that I thought she was in pain, so she gave her some morphine, which immediately calmed her down.  She was loopy for a while afterward, but at least not in pain.  It pisses me off that they got behind on her pain meds.  How can you deprive a 3 month old of a little Tylenol to make sure that her pain doesn't get out of control?  It's like we've been playing catch up all day long.  She had a dose of Tylenol with codeine a couple of hours ago, and the peds floor nurse is going to make sure not to miss any doses from here on out.  So hopefully she'll be happier.  I do not like to see her cry like that.

And the biggest and most significant thing to me is her eating.  As I've posted before, Miss Cora's eating has been the main focus of our lives since she arrived.  So difficult.  If it weren't for her feeding tube, things would have been very different in the past few weeks, and not in a good way.  Now, lo and behold, she took 100 mL this morning in no time at all.  No gagging, heaving or retching either.  Her second feed wasn't quite as good, but I attribute that to her pain.  She had a freak-out mid feed and needed the morphine.  She again took about 100 at her last feed!  It is absolutely amazing to me.

After her first great feed this morning, after walking away, I sat down and started to cry.  Since it had been normal for her all along, I didn't realize how truly compromised she was until I had this to compare it to.  And it's only the second day after her surgery.  It makes me so sad as it sinks in that my daughter was in pretty advanced congestive heart failure until a couple of days ago.  And how amazing it is that a surgery can actually make things so much better.  It's just so hard to believe, even though I knew it.  I guess I didn't really know it.  What a shift of perspective.

Things aren't quite easy yet.  We're not out of the hospital until we're walking out the door, and we've got to learn to read her signals for pain and try and make her as comfortable as possible. But it's just incredible how quickly she is recovering.  Everyone told me that infants are incredibly resilient after heart surgery.  And so far we've been very lucky with her results.  We'll just keep focusing on continuing to improve and recover.

I'm gonna sign off now and go watch Nick give our girl a bottle.  Looks like it just may be a new record...


Cora getting a nebulizer treatment to help with airway swelling after getting off the ventilator. 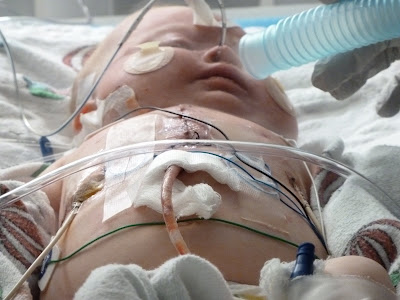 Chilling in the PICU-  alert and content yesterday afternoon. 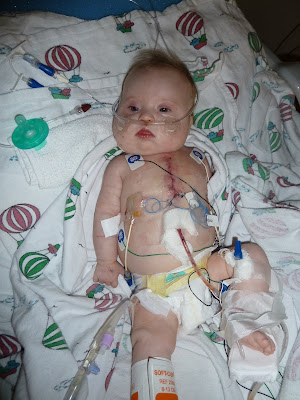 Having her first bottle of milk with Daddy last night.  Hungry girlie! 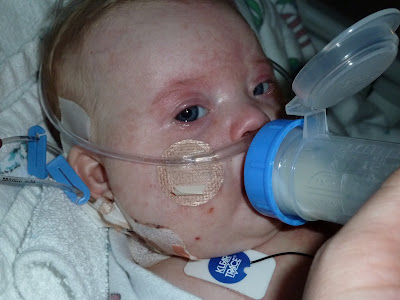 On the pediatric floor rocking her new legwarmers! 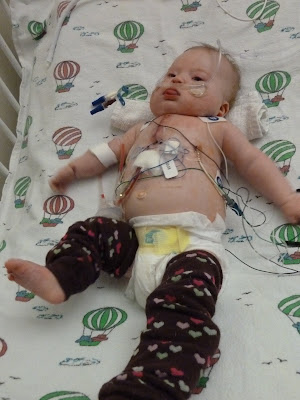 Beating her record, once again! 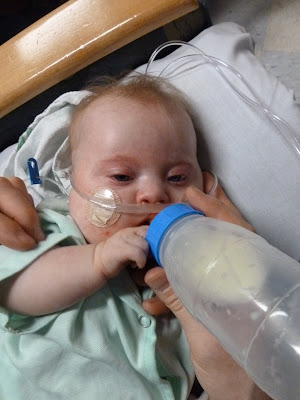