I'm happy to say that after about 10 hours on the phone to and from Cora's pediatrician, our insurance company and the orthoticist (in addition to requests from her physical therapist and chiropractor), we finally got Cora's Sure Steps foot and ankle braces last week.

If I didn't have a background in insurance billing and coding and authorizations, I may have given up some time ago.

But now, Miss Cora has some snazzy new kicks. 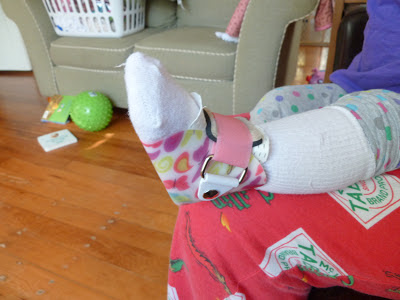 Cora has pretty low tone, which has put her a little behind the curve on learning the gross motor biggies:  walking, crawling and climbing.  It also makes her ankles pretty wobbly and significantly pronated.

Whether she's not motivated due to lack or interest or because it's so hard for her, she's been pretty reluctant to make consistent progress.

But I have noticed her wanting to scoot around more, and just being more interested in movement lately.  She's still somewhat hesitant to get on her feet, but will pull to stand if she is right next to me, and will move her feet in a walking motion if she is held under her arms.

We are hoping that with the new-found stability her braces offer, that she'll feel more confident in standing and that she will start to make a little more progress in the mobility front.

Who knows?  Maybe she'll even surprise us by getting up on two knees and four-point crawling finally.

It's all to be seen.  In the long run, I'm not particularly worried, since I know that when the time is right she'll be running around everywhere.  And like many mothers have pointed out, having a less-mobile child does have its advantages.
But I will definitely enjoy watching her explore her word from a vertical position when the time is right.

Email ThisBlogThis!Share to TwitterShare to FacebookShare to Pinterest
Labels: 31 for 21, Development, Medical stuff