When it comes to life with Cora, you really get to practice patience.

Although I can often see her making steady progress in some areas, it is often painfully slow.  It's not uncommon to find that it can take her a year or more to master learning to do something that most children do in a month or two.  So we have learned to appreciate the little accomplishments, the small baby steps that gradually add up.

Right now, though, it seems like she's making some incredible progress in several areas.  It's really exciting to see.

Probably the most obvious development is in walking.  Since I came back after my weekend away from her, she is suddenly walking around a lot more.  Probably more than half the time while she's in the house.  When we're outside, I still hold her hand much of the time, since it's much harder to walk on uneven surfaces.  But she is getting there, and it is an exciting thing to behold.  She's also been climbing like crazy.  Just this morning, I turned around to find her sitting in her high chair trying to buckle herself in.  Yikes.

And then there's speech.  Communication has always been a strength for Cora, but speech has been fairly difficult.  Although she has a large receptive and signing vocabulary, she has a hard time making the specific sounds needed to form spoken words.  She started saying recognizable words shortly after turning one, and although she says quite a number of words, her articulation hadn't improved much until recently.  Now she is learning to pronounce a couple of ending consonants, like "cute" and "up."  She is starting to figure out diphthongs, like in "hi," and "bye," and many of her words are starting to sound a little clearer.  It's still a slow process, but it's been wonderful to see.

She is even improving her fine motor skills.  In addition to feeding herself pretty well, she can now put on her socks, pants (most of the way up), and sometimes get on her shoes and shirt.  She loves to help cook and clean, and definitely seems to have the "clean gene" that only certain people in my family are blessed with.

During pumpkin carving last night she was thrilled.  She drew on her pumpkin, helped scoop out the seeds, put the lid off and on, and played shape sorter with the shapes that Nick helped her cut out.  It was pretty fun for me to see her actually get excited about carving her own pumpkin. 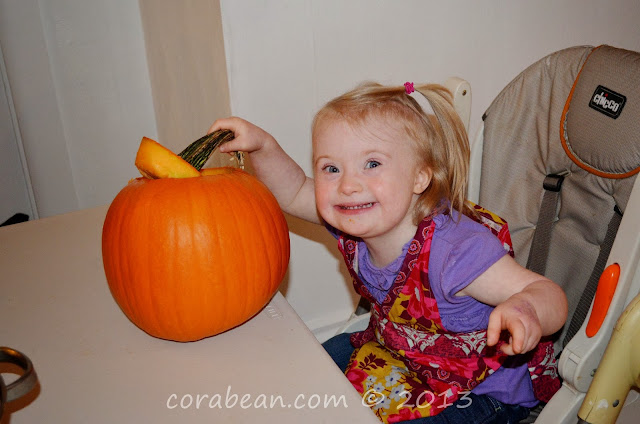 The glee on her face when she saw the jack-o-lanterns lit on the front porch was pretty cute, indeed, and she loved showing her pumpkin off to her Early Intervention teachers this morning. 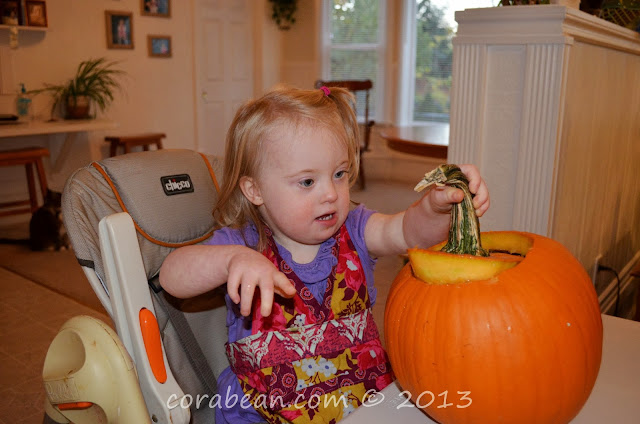 It's pretty exciting to see this explosion of learning and development.  She seems proud of the fact that she is able to do more and more all by herself.  And, even though I feel a little wistful watching her grow up, it feels good to know that even though she is taking her time, she is getting there. 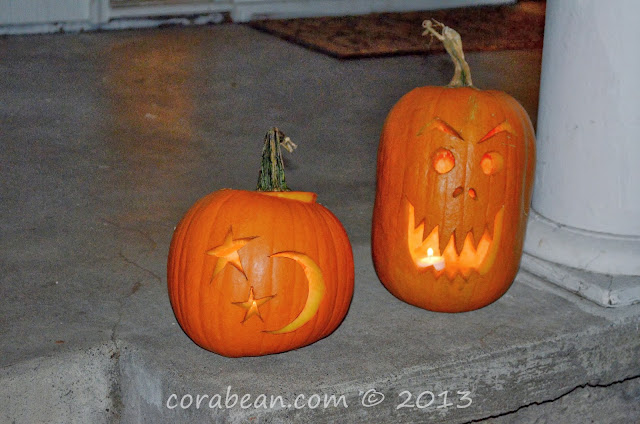 Email ThisBlogThis!Share to TwitterShare to FacebookShare to Pinterest
Labels: 31 for 21, Cora's antics, Development